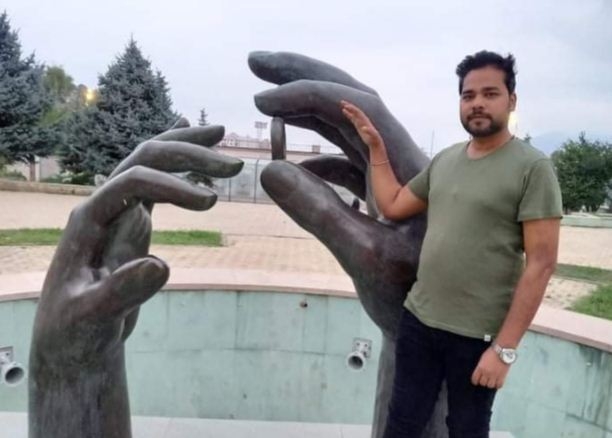 Bhopal, Aug 31  The family members of a 27-year-old medical student, who was allegedly murdered in Armenia a few days ago, have urged the Madhya Pradesh government to help to bring the body of the deceased back home to perform the last rites. They had received information about the death of Ashutosh Dwivedi from the Indian Embassy in Armenia on August 29.

Ever since the family was informed about the alleged murder of Ashutosh, they have been seeking help from the Central and the state governments. Dwivedi was pursuing a medical degree in an Armenian-based medical college. A family member told IANS that Dwivedi had gone to Armenia in 2020 and he was a fourth-year medical student.

The deceased’s family lives in a village in Teonthar assembly constituency in Rewa district of Madhya Pradesh. His father is a teacher in a government school in the district. A family member said they received information that Ashutosh was murdered and the Armenia police have also arrested a 45-year-old person in the case. However, the family is yet to know why Ashutosh was murdered.

The family has urged Madhya Pradesh chief minister Shivraj Singh Chouhan to help bring the body back home as soon as possible. “Ashutosh’s father is a teacher in a government-run school in Teothar area and the family can’t bear the expenses of a special airplane to carry the body back to Delhi or Bhopal. We have urged the state government to provide help in this regard,” said Rakesh Tiwari, a cousin of Ashutosh.

BJP MLA from Teonthar assembly Shyamlal Dwivedi, who is also a relative of the deceased, wrote to the office of the Madhya Pradesh Chief Minister about the matter. Talking to IANS on Wednesday, he said, “I received a call from chief minister Shivraj Singh Chouhan yesterday, and he has assured me that the state government will provide all possible help to bring the body home. After the CM’s call, a senior official from his office also informed that the state government would bear all the expenses to bring the body home. I am thankful to our CM for his helping hand.”

As per reports, Dwivedi’s body was found in Yerevan (capital of Armenia) by the police on August 28 near a shop located in an area called DeWitt Beck Street.

Reports suggested that the Armenian police have arrested a 45-year-old man named Balwinder Singh involved in the alleged murder.

Rewa district collector Manoj Push said on Wednesday that “Efforts are being made to bring back the body of Ashutosh Dwivedi. Discussion held with senior officials in the state government. We are also in regular contact with the Armenian embassy in Delhi.”

However, the family was yet to know when exactly the body will be flown from Armenia to New Delhi and they are waiting for a response from the authorities on this.