New Delhi, Oct 29 Women’s rights activist and granddaughter of freedom fighter late Nazim Ali, Naish Hasan, who hails from Lucknow, has become the voice of Muslim women today. For the past two decades she has been fighting for women’s rights which include complete freedom for Muslim women.

She is the first woman in the country having a Ph.D in the study of Muslim women who are victims of practices like Nikah-Halala. She had approached the Supreme Court against practices in the Muslim community such as Nikah-Halala, Nikah-Mut’ah, Misyar marriage, polygamy and the current Sharia law of 1937.

Naish Hasan hails from Teri village in Sultanpur district of Uttar Pradesh. In 1916, her grandfather Nazim Ali at the age of 20 dedicated his life to the freedom struggle and continued to fight till 1947. After Independence, he was elected the first MLA from Jaisinghpur assembly constituency.

Naish Hasan, an M.Phil in Sociology from Lucknow university and a Ph.D from Shakuntala Mishra university, told IANS that her grandfather faced taunts from the society when he encouraged his daughters to study. But her grandfather was a progressive thinker who always swam against the tide and kept motivating all young Muslim women to study. He was among those Muslim leaders who vociferously opposed the Muslim League.

Pursuing her higher studies, Naish Hasan came across many cases where Muslim men had given ‘triple-talaq’ to their wives and thrown them out of the house over small issues. Hearing the painful stories of such women, Hasan decided to become the voice of Muslim women.

Since 2005, she has been raising her voice against ‘triple talaq’. She became the most vociferous voice in the Shah Bano case for which she faced widespread criticism and opposition within the Muslim community.

However, carrying forward the legacy of her grandfather Nazim Ali, Naish stayed firm on her mission. ‘Triple-talaq’ became a topic of discussion in the country due to her raising the issue repeatedly. Following this, the women who were victims of triple-talaq also started coming forward to fight for their rights.

Naish Hasan told IANS that she started researching extensively to know more about ‘Triple-talaq, Nikah- halala, Nikah- Mut’ah and Sharia. For this she made several trips from Mumbai to Hyderabad. Now she can debate on them with any lawyer. Through logic and facts, she is gradually succeeding in changing the mindset of the people in the society.

Hasan told IANS, “Many things were spread in the society. When I started investigating the prevalent practices in the society, I came to know that the Quran does not mention any such practices. These are all Muslim clergy’s interpretations. To oppose such evils, I started raising my voice against them.”

Hasan said the women waiting for justice were shattered in 1986 when the verdict in the Shah Bano case was overturned. After a long time when another woman Shayara Bano approached the court, Muslim women’s demand for justice received a fillip. After the abolition of triple-talaq, Muslim women are now waiting for the eradication of Nikah-Halala and Nikah- Mut’ah. A speedy verdict is expected soon on the petition pending in the Supreme Court on these two issues.

On the issues relating to the country and religion, Naish Hasan said the patriotism of the Muslims in India is as intense as ever. It is shameful for some people to doubt their patriotism or emphasize more on their religious identity.

She said, “I believe that a person has many identities, it is wrong to link it only with his/her religious identity. Being a Muslim is one of many identities, but yet it is regarded the primary identity. There are both good and bad people in the society.”

She added, “It is dangerous to target a specific community. My grandfather Nazim Ali is an example of patriotism and mutual harmony who sacrificed his life for the country. Those with extremist ideology used to be jealous of him. He loved his country which was not acceptable to some small-minded people that is why after his death the prayers during his funeral were not read by the people with radical views. Muslims are as patriotic as everyone else.” 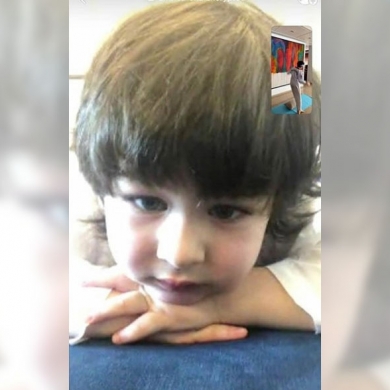 Kareena, Karisma share pic of their boys in lockdown