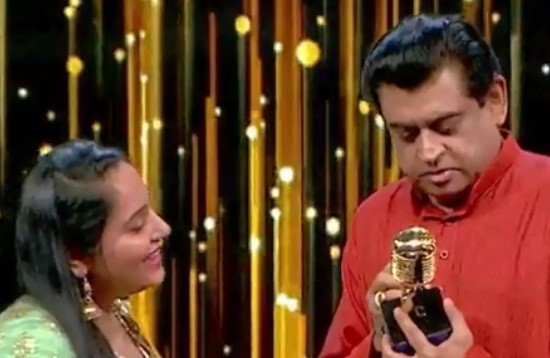 Mumbai, Oct 29  Singer Amit Kumar signed an autograph for ‘Indian Idol 13’ contestant Debosmita Roy from Kolkata and appreciated her performance on his

Apart from this, she also amazed him and the judges by choosing a difficult track ‘Tere mere milan ki yeh raina’ which is inspired by Bengali song, ‘Jodi Taare Nayi Chini Go Sheki’ originally sung by Kishore Kumar, and the song was recomposed by S.D. Burman for the Hindi version from the 1973 film ‘Abhimaan’.

Amit, who is known for his songs such as ‘Main Ik Panchi Matwaala Re’ from the film ‘Door Ka Raahi’, ‘Aati Rahengi Baharein’ in ‘Kasme Vaade’, ‘Laila o Laila’ for ‘Qurbani’ and many more said while praising the contestant: “Beautifully sung. Kya awaaz hai! (What a voice) The way you felt the song and sang it was outstanding. According to me, you will be the voice of our industry soon.” After giving her all the compliments he gave her an autograph on the golden mic she received during the auditions for giving the best performance of all.

Singer and judge Himesh Reshammiya also said that her voice is ‘divine’: “From the auditions till now, there is a divine energy in your voice that touches every listener’s heart.”