Los Angeles, Nov 2  Actor Dustin Hoffman has been accused of sexually harassing Anna Graham Hunter when she was an intern aged 17 in 1985.
Hunter, now a writer, has alleged that the actor, now 80, groped her on the set of the movie “Death of a Salesman” and spoke inappropriately about sex with her, reports theguardian.com.
“He asked me to give him a foot massage on my first day on set; I did,” Hunter wrote in the guest column for hollywoodreporter.com.
“He was openly flirtatious, he grabbed my ass, he talked about sex to me and in front of me. One morning I went to his dressing room to take his breakfast order; he looked at me and grinned, taking his time. Then he said, ‘I’ll have a hard-boiled egg  and a soft-boiled clitoris’. His entourage burst out laughing.
“I left, speechless. Then I went to the bathroom and cried.”
Hunter detailed Hoffman’s alleged treatment of her over her five weeks on set in a diary that she mailed to her sister at the time.
“Today, when I was walking Dustin to his limo, he felt my a** four times. I hit him each time, hard, and told him he was a dirty old man,” she wrote.
She claimed that on set, she was told to put up with his behaviour by a supervisor who told her to “sacrifice” some of her values for the sake of the production.
Hoffman has responded to the article with an apology: “I have the utmost respect for women and feel terrible that anything I might have done could have put her in an uncomfortable situation. I am sorry. It is not reflective of who I am.”
The story comes after a deluge of similar stories of sexual harassment within Hollywood against producer Harvey Weinstein, filmmaker James Toback and actor Kevin Spacey.
–IANS 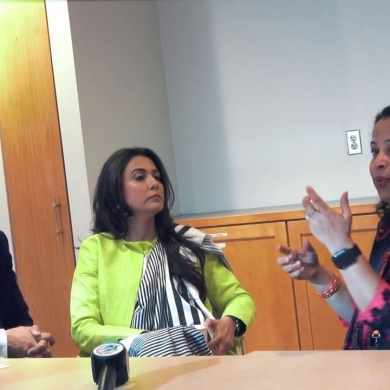