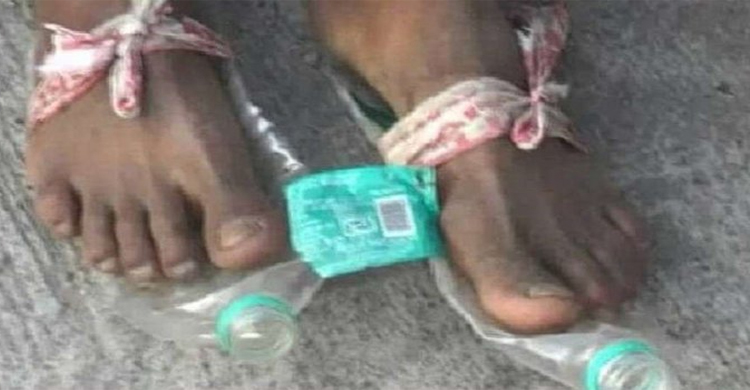 Lucknow, May 15  “Khana to mil jayega, sahib ek purani chappal de do,” said Tiloki Kumar (32) as he showed the boils and cuts on his feet.

Tiloki is one of the thousands who have been walking down to their homes from Gujarat and other states.

Tiloki, a resident of Pipraich in Gorakhpur, said that he worked in a garment unit in Surat and had decided to walk down after he could not get on to the train.

“I got myself registered for the Shramik train and waited for a week. No one called up and finally we decided to walk back home. It is better to die at home than in an unknown place,” he said.

He said his slippers had given way even before he entered the borders of Uttar Pradesh.

“I have been walking barefoot and my boils are also bleeding. I still have to walk more than 300 kilometers,” he said.

Thakur, another migrant in the group said that while people were offering them food and water along the way, footwear was now posing a major problem.

“The sole of my shoe has come off so I have tied a piece of cloth over it. We can go without food for a day or two but walking is impossible in this condition,” he said.

Both, Triloki and Thakur refuse money –“Where will we buy slippers?” they ask.

Seeing the plight of these migrants – and many of them are walking barefoot – a shoe shop owner in Utaratia on the outskirts of Lucknow, had decided to sell chappals at cost price of Rs 60 per pair.

A group of senior citizens who refuse to divulge their names saying we do not want publicity on this issue, have also bought slippers from a local shop and are giving them to migrant workers on the Lucknow-Barabanki road.

Navin Tiwari, a well-known businessman and social activist, has been distributing food and water to migrants on the Lucknow-Faizabad highway. He has now bought slippers in bulk and will be distributing them from Friday.