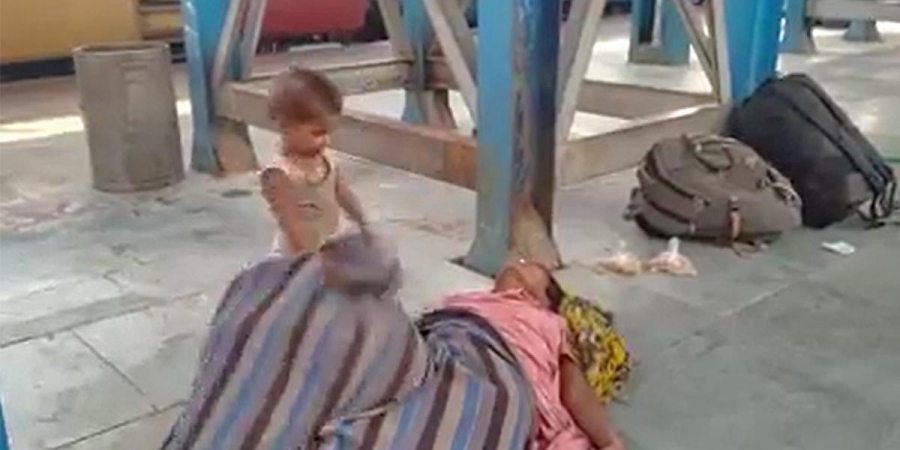 Muzaffarpur (Bihar), May 27 A video of a toddler pulling the shroud from the dead body of her mother in Bihar’s Muzaffarpur railway station has gone viral on social media, highlighting the tragedy of the migrant workers going back to their native places.

The railways said that the woman in the video died on the train as she was unwell. The video clip, which has now gone viral on social media from the Muzaffarpur railway station, is of Arbina Khatoon (35), who had arrived in a Shramik Special train for migrants on May 25.

East Central Railway spokesperson Rajesh Kumar told IANS, “The video is of May 25. The family had deboarded at the Muzaffarpur railway station from the Ahmedabad-Madhubani Shramik Special train.”

He said the family was going back to their home in Katihar. The official said that Khatoon complained of uneasiness in the train on Monday at around 12 noon. “She soon passed away and her body was taken down from the train at the Muzaffarpur railway station at 3 p.m.,” the East Central Railway spokesperson said.

The woman was heading to Katihar with her sister, sister’s husband and two children, he said. In the video, which has gone viral on social media, it can be seen that after her body was laid out on the station platform, her son kept playing and trying to wake her up.

The official also said that according to the family members of the deceased woman, she was unwell and mentally unstable. The ECR official in a statement also said that the body of another woman was also brought down from the Surat-Purnia Shramik Special train on Wednesday at the Mansi station in Bihar.

He said the deceased was identified as Uresh Khatoon, who was returning back to her native place in Katihar. “She had undergone a heart operation on March 20 and passed away in the train after the train crossed Begusarai station,” he said.

The Indian Railways had suspended operations of the passenger, mail and express trains since March 25 amid the nationwide lockdown to combat the spread of coronavirus.

The railways started to run Shramik Special trains from May 1 to transport stranded migrant workers, students, pilgrims and tourists and has till date ferried over 44 lakh people across the country in over 3,274 trains.

From May 21 to 25, several Shramik Special trains were delayed for hours as these were diverted due to congestion on the Jabalpur-Manikpur section. The railways has said that the issue of congestion has now been resolved.

Meanwhile, Muzaffarpur district administration issued a statement saying that woman was ill for the past three days and died of sickness. One of the deceased’s relatives, however, contradicted the statement alleging that she died of hunger and severe heat in the train.

Lakhs of migrants have been left to fend for themselves after the government imposed a pan-India lockdown in March. Left unemployed, the migrants set out for their homes thousands of kilometres away, walking or on cycles, autos or trucks. Many died before they could reach home, either in road accidents or from hunger and exhaustion.