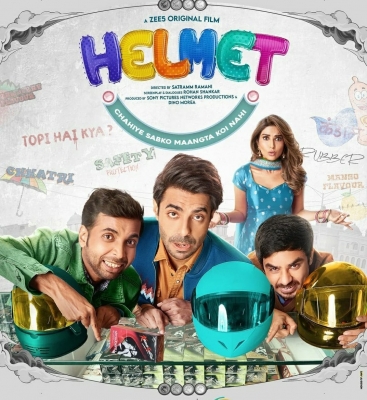 Set in Kanpur, this film, packaged as an entertainer, hopes to change the mindset of the culturally and morally stifled population of this country, especially on matters such as using methods of birth control.

In our society, ‘condom’ is a taboo word used in hushed tones, but this film blatantly propagates its usage. Even the title, a synonym for the condom, is aptly applied. Nothing wrong about it. But the story — or you may say the hurriedly drafted, deceptive script with daft humour and scant regard to the finer nuances of the written or spoken word — used for the shadowy and complex propagation of the central thought, should be taken in a lighter vein.

Lucky (Aparshakti Khurana), an unwanted child who grew up in an orphanage, is a singer in a brass band and is in love with Rupali (Pranutan Bahl), a rich man’s daughter.

In order to make a quick buck so that he can start his own band, and thereby get married to Rupali, Lucky and his friends Sultan (Abhishek Banerjee) and Minus (Ashish Verma) hatch a plan to rob an e-commerce company truck carrying mobile phones.

They succeed is stealing the packages from the truck, but instead of the mobile phones, the stolen goods turn out to be condoms. How the trio dispose of the stolen warea and are later glorified by an NGO that’s conducting research for the National AIDS Awareness Programme, forms the crux of the narrative.

On the performance front, all the actors are competent enough. With his boy-next-door features, Aparshakti as Lucky is in top form, delivering the full range of his talent. He is natural and believable, but unfortunately, he lacks charisma.

Pranutan Bahl, as the bold, modern, small-town girl Rupali, along with Ashish Verma, as the hard-of-hearing, dim-witted Minus, and Abhishek Banerjee as the chicken breeder Sultan appear to be forced and over-the-top.

Ashish Vidyarthi, as Rupali’s father Jogi, has an insignificant role and is short-changed by the script. Similarly, Dino Morea is wasted in a passing scene.

Mounted with moderate production values, the film’s cinematography or editing leave nothing to write home about. The sound and background score help in creating the right ambience for the film and visually the film captures the essence of a small town with precision.