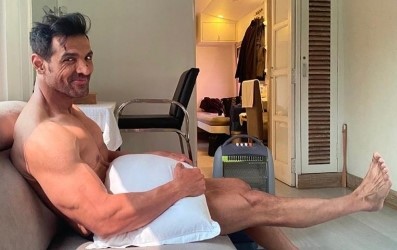 John Abraham is ‘waiting for wardrobe’, poses with just a pillow!

Mumbai, March 2 Actor John Abraham treated his fans to an interesting picture of himself on Instagram on Tuesday. Posing with just a pillow, the actor wrote about how he was waiting for his clothes to arrive!

In the picture, the actor is sitting on a couch, next to a room heater, with a mysterious smile on his face. “Waiting for wardrobe 🙂 #setlife,” he captioned the picture.

His fans seem to have loved the picture and posted comments such as “Mera Bhai mODEL (sic)” and “I love you!”

Meanwhile, John started the shoot for his film Ek Villian Returns and posted about it on Instagram the day before.

He put up a picture with the cast of the film and captioned it: “And it begins…?? #EkVillainReturns (sic).”

The action thriller also stars Disha Patani, Arjun Kapoor and Tara Sutaria. The film is being directed by Mohit Suri and is a sequel to his film Ek Villian which released in 2014. The shoot for Ek Villian Returns was to start last year, however, it was postponed due to the lockdown. The film is now slated to release on February 11 next year.