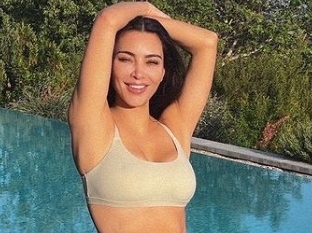 Los Angeles, April 25  Reality TV star Kim Kardashian has been accused again of yet another photoshop fail with people claiming she edited

her waist in a series of poolside shots.

Kim was called out over the three Instagram images she posted, along with the caption “Sunday in my @skims”, reports mirror.co.uk.

The reality TV star was seen with her arms raised above her head on every picture, dressed in a sports bra and oversized jogging bottoms.

But it was her midriff that drew the greatest attention, especially the apparent absence of, or curious position of, her belly button.

One user said: “You forgot to leave in your belly button.”

Many Instagram users then began to see the photographs in a different light with one querying: “Something is off about the second pic or is it just me?”

Two netizens did jump to Kim’s defence, responding: “Just you.”

The sceptical remarks continued, though, with one person saying: “You can see where you photoshopped your waist” and another adding: “Does anyone else thinks this looks hella edited.”

This is not the first occasion in recent times that Kim has been accused of photoshopping images of herself.

Earlier this month, during a Skims promotional campaign that also featured Tyra Banks, Heidi Klum and Candice Swanepoel, social media cynics argued that her hips and thighs had been manipulated to make her look slimmer and curvier.

The doubters also came out in force in February when Kim was accused of accentuating her waist again, arguing that a distorted piece of gym equipment behind her proved she had touched up the image.