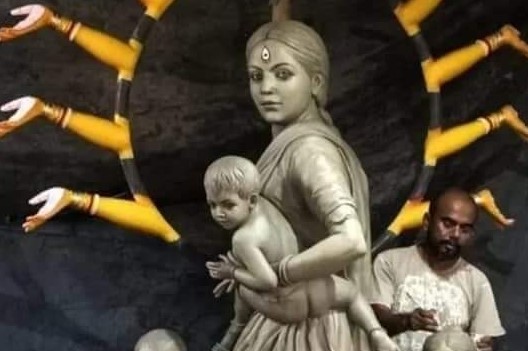 Kolkata, Oct 19  Every year, Durga Puja committees in the city compete with each other in an attempt to surprise patrons with new and unique themes in pandal and idol concepts. The Covid scare has obviously not dampened spirits this year. The craze to be innovative is on.

Among the popular pujas in the city is the Barisha Club Durga Puja in Behala. This year, their innovation lies in idol design. Ma Durga is imagined as a female migrant worker. Her children — Saraswati, Lakshmi, Kartik and Ganesh — are toddlers.

The theme is a brainchild of concept designer Rintu Das and is brought alive by sculptor Pallab Bhowmick from Krishnanagar in Bengal’s Nadia district. The idea aims at paying tribute to the resilience of the thousands of migrant workers who walked for miles and across states to reach home amid lockdown.

Das and Bhowmick’s effort has caught the attention of several Bollywood celebrities, and photographs of the Durga idol are going viral on social media.

Actress Raveena Tandon shared a photo of the Durga idol and tweeted: “Moving work by sculptor Pallab Bhowmick for this year’s pujo in one of the major pandals of Kolkata — Ma Durga as a migrant worker with her children. #MaShakti.”

“No matter what people tell you, words n ideas can change the world — Most stunning depiction of #maadurga by Bengal artist Pallab Bhowmik. Maa Durga as migrant worker with her children. Wishing you all #HappyNavratri,” tweeted Urmila Matondkar.

“About time we truly celebrated the spirit of the #DivineFeminine… Goddess Durga reimagined here as a migrant mother with her children, by artist #PallabBhaumik #Navratri #DurgaPuja #Pujo #Kolkata #BarishaClub,” posted Tisca Chopra.

“This is why Bengal’s Durga idols have always been miles ahead in representation and inclusivity. It’s art,” wrote Sayani Gupta.

Bhowmick surprises you by saying he has no idea of the starry ovation coming his way.

“I am not very regular on social media and had no idea that Bollywood stars have liked my creation. Thank you for sharing this news with me. I am very happy!” he told IANS.

On his artwork, Bhowmick added: “It took me two months to create this idol, I began working on it in August. It is made of fibre glass. Rintu Das created this theme and I created the idol as per his instructions. My major inspiration has been a painting by late artist Bikash Bhattacharjee from his Durga series.”

Concept designer Das opened up on what inspired him to create the theme.

“The inspiration came when we were all confined within our homes during the lockdown. Whenever I would switch on the TV, the news of migrant workers suffering terribly, walking mile after mile without food and water while trying to return home, pained me a lot. That’s when I decided that this year’s Durga Puja theme should pay a tribute to migrant workers, especially the women and their struggles. Then I made the proposal to Barisha club.”

“Goddess Durga resides not just in the idol, but within every woman. That’s why we are paying a tribute to narishakti or feminine power through this idol,” he explained. 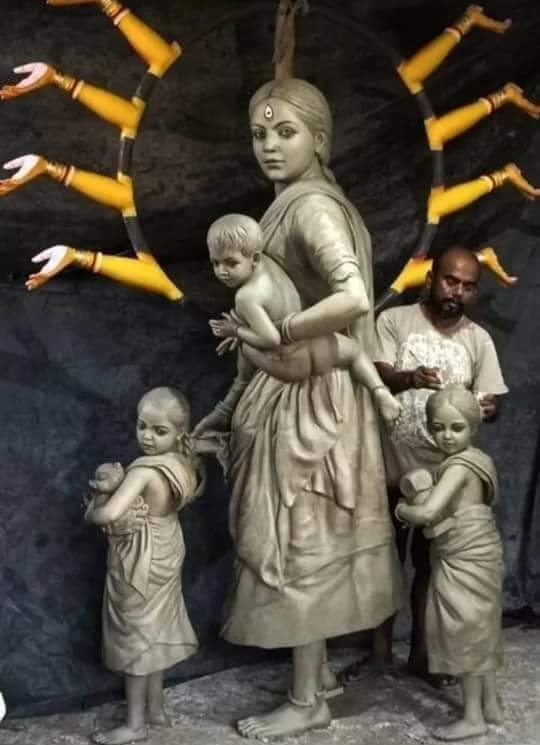 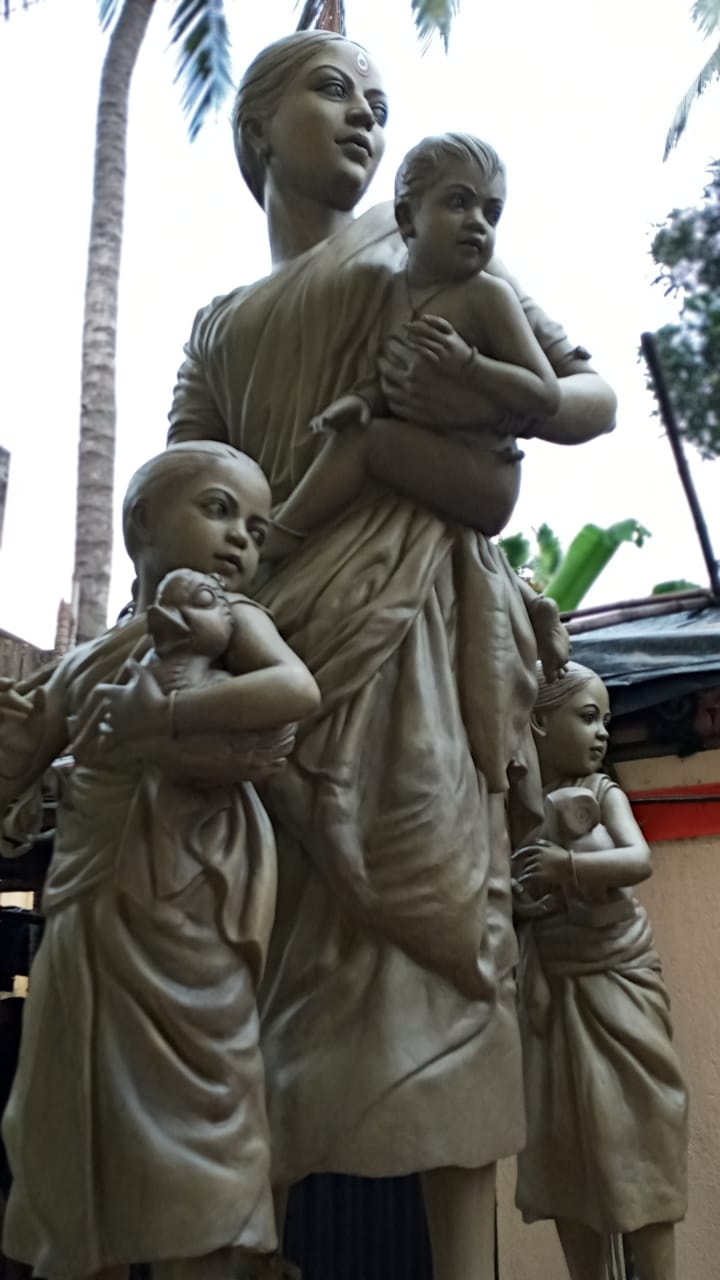 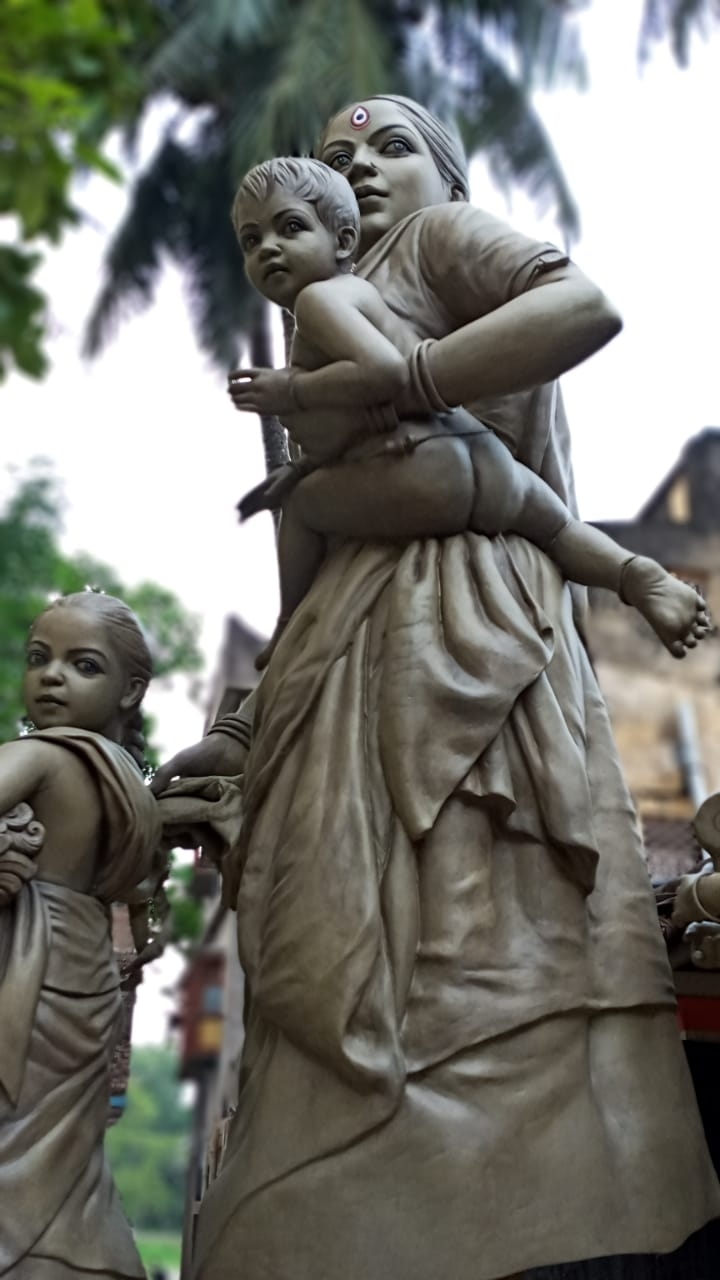 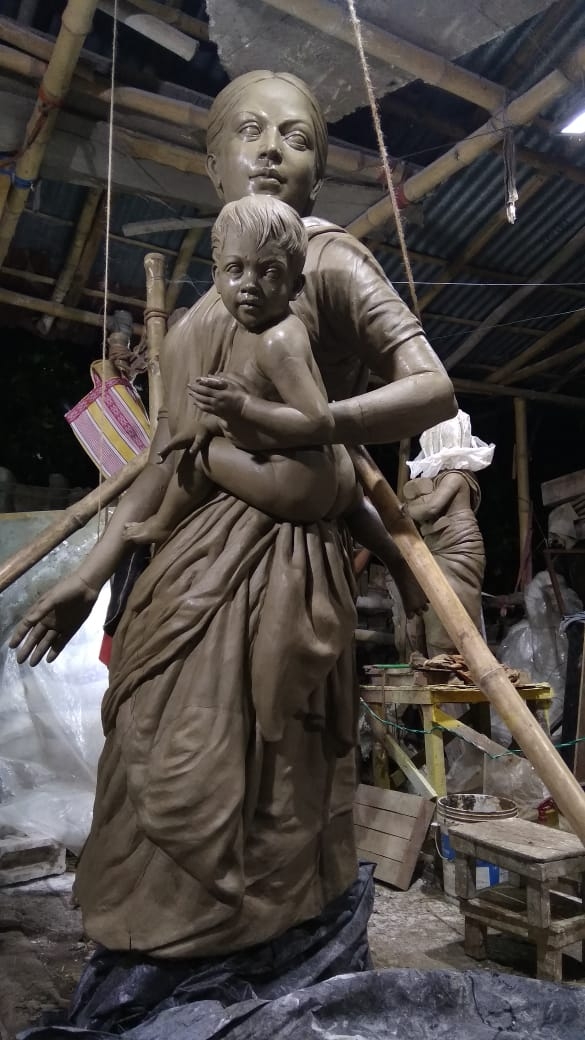 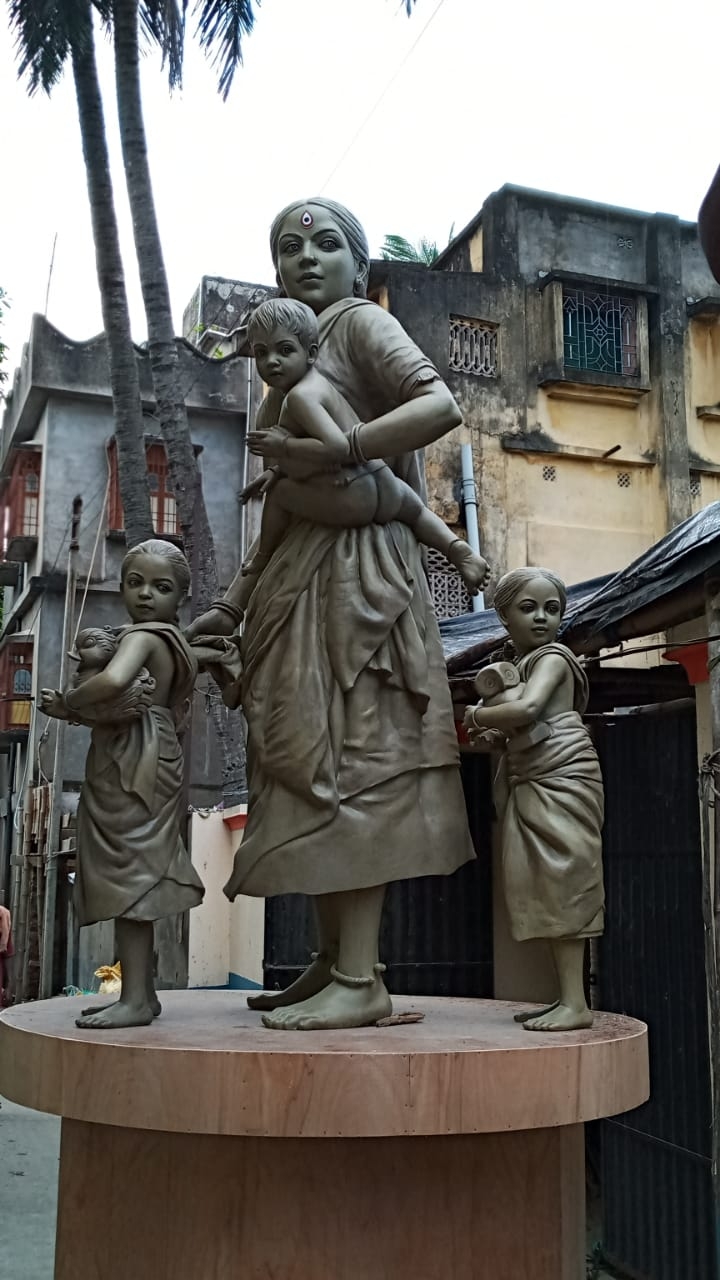 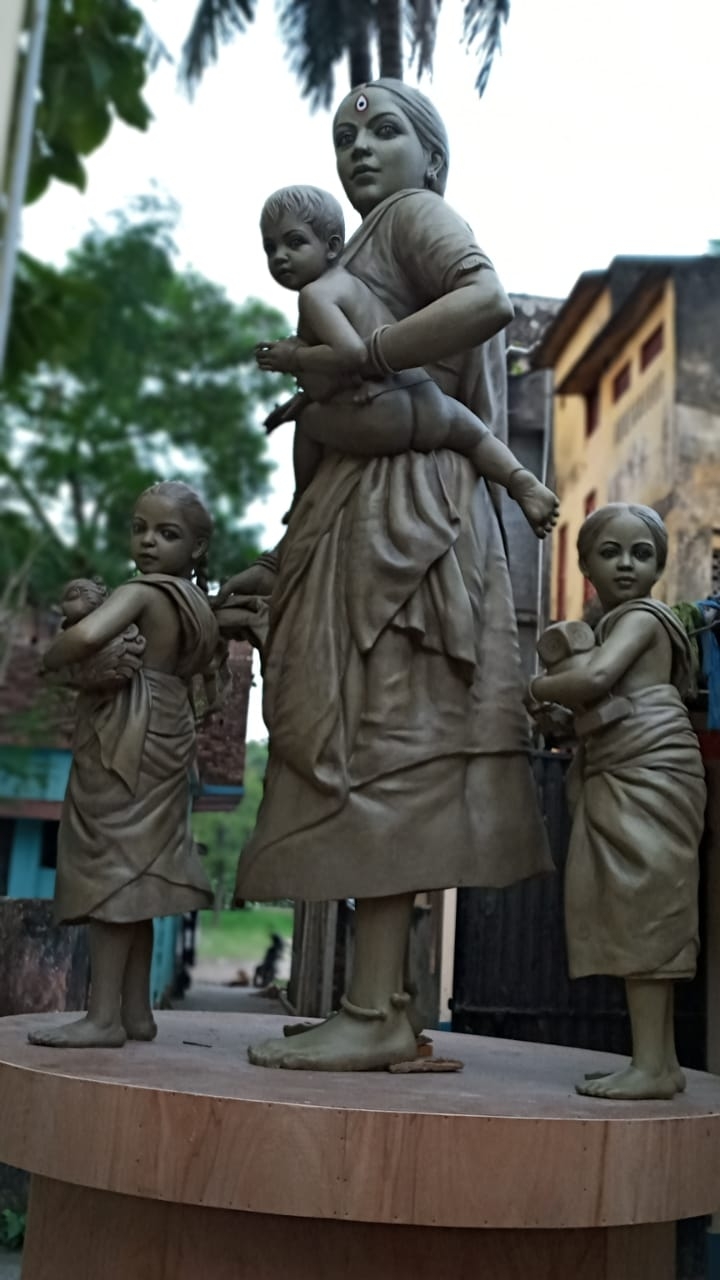 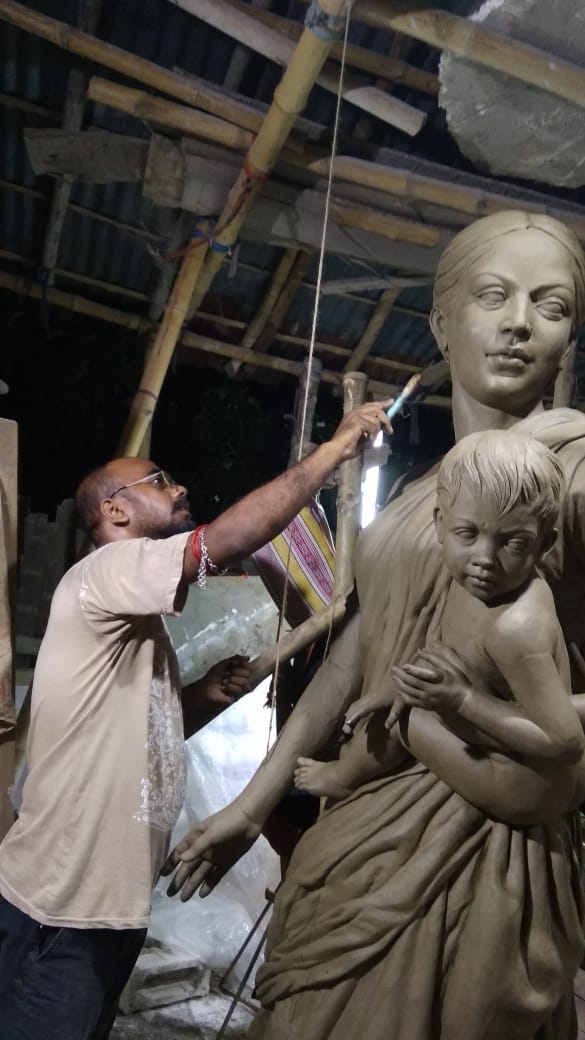 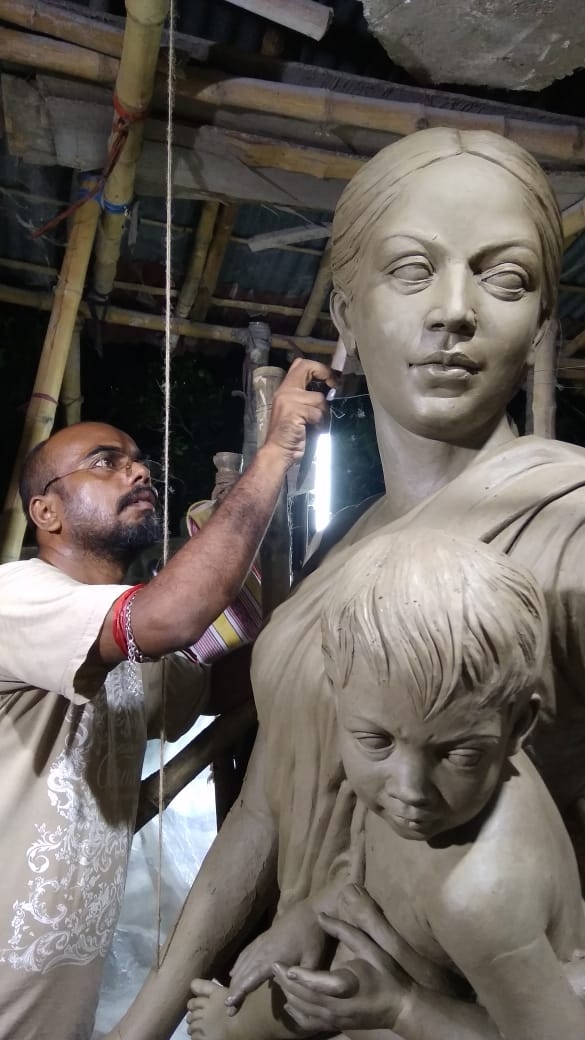 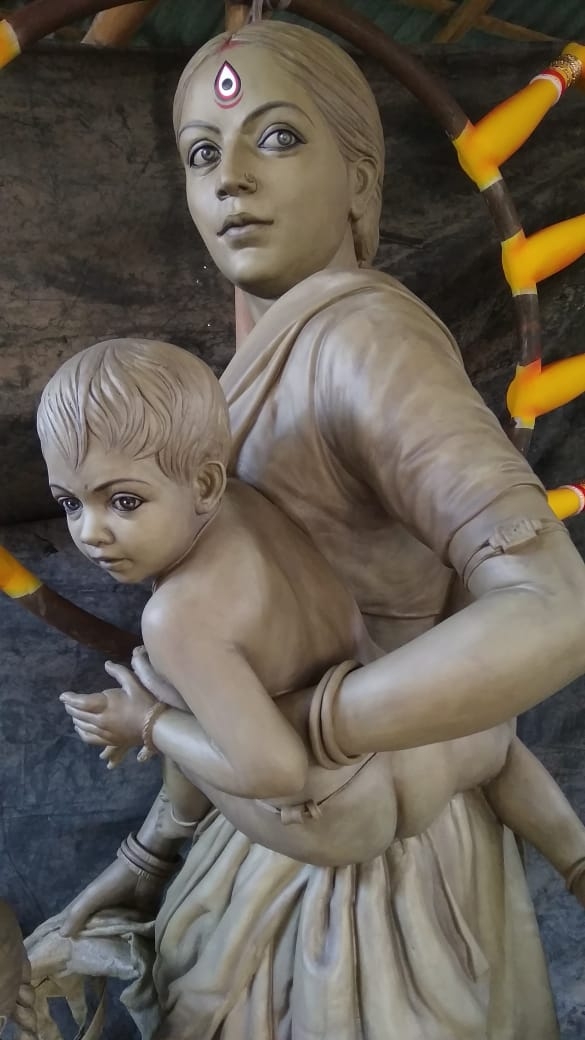