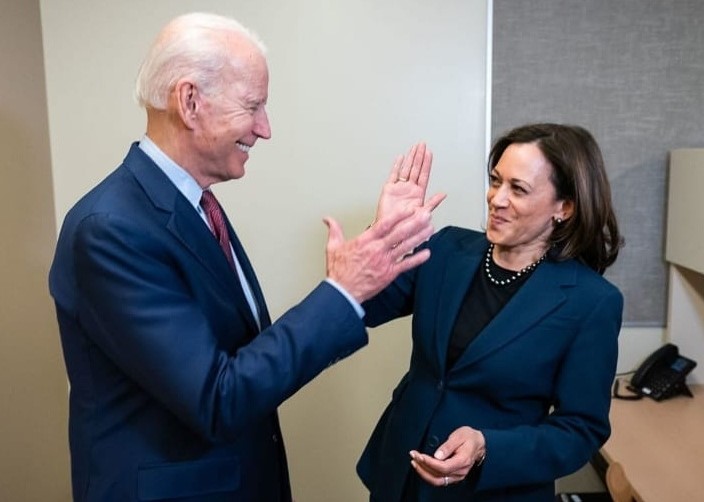 New York, Oct 16  A new poll has revealed that Indian-Americans overwhelmingly support the Democratic presidential nominee Joe Biden for the November 3 election with “great enthusiasm”, generated by having Kamala Harris as the Vice Presidential candidate.

The poll released on Thursday reported that 72 per cent of registered Indian-American voters said that they planned to vote for the Biden-Harris ticket and only 22 per cent for President Donald Trump.

The poll showed a slight erosion of five per cent in support to Biden among Indian-Americans compared to the 77 per cent Hillary Clinton had received from them in 2016, according to the 2016 Post-Election National Asian American Survey, while Trump seemed to have improved his support level by six per cent compared to the 16 per cent in the last election.

The new poll showed that the close ties between Trump and Prime Minister Narendra Modi have not translated into a swing among Indian American voters towards the Republican, according to a paper published by Carnegie analysing it.

Harris’s selection to be the Vice Presidential candidate might not “change the numbers of votes” but it created “greater enthusiasm” for the Democrats, the analysis said pointing out that the community was always heavily committed to that party.

The Indian American Attitudes Survey (IAAS) was conducted last month in partnership by the polling organisation, YouGov, and the Carnegie Endowment for International Peace and with Johns Hopkins University and the University of Pennsylvania associated with the study.

According to US Census Bureau in 2018 there were 4.16 million Asian Indians of whom 2.62 million were US citizens.

But despite the small numbers, the community’s support is avidly sought by both parties.

“Even though Indian Americans comprise slightly more than one per cent of the total US population e and less than one per cent of all registered voters e both major parties are leaving no stone unturned in reaching out to this community (perhaps mindful of the closeness of the 2016 elections),” according to the Carnegies analysis of the IAAS poll.

The analysis said that India-US relations was not a priority for most Indian Americans and only three per cent said it was the most important issue.

It added that the poll finding ran counter to media coverage implying that many Indian-Americans are “increasingly troubled” by Democratic Party’s foreign policy positions on India, especially the opposition from Harris and key Democratic lawmakers to “changes in polity under Modi.”

More Indian-Americans, 39 per cent, reported that the Democratic Party does a better job on India-US relations while 18 per cent said the Republican Party is better.

The analysis said that “this may well reflect their underlying preferences for the Democratic Party”.

More Indian Americans e 21 per cent e picked the Covid-19 pandemic-impacted economy as the top issue and the related healthcare issue was the main issue for 20 per cent, it said.

The analysis was written by Devesh Kapur, a professor at Johns Hopkins University, Milan Vaishnav, Carnegie’s South Asia Programme director, and Sumitra Badrinathan, a PhD student at the University of Pennsylvania.

The perception among Indian Americans that the Republican Party “is intolerant of minorities and overly influenced by Christian evangelicalism” keeps them from identifying with the party, according to the analysis.

Among non-Republicans, 27 per cent said that the Republican Party is intolerant of minorities and 19 per cent that it is influenced by Christian Evangelicals e a euphemism for fundamentalists e while 16 per cent disagreed with its policy on legal immigration.

Among those who do not identify with the Democratic Party, 20 per cent cited economic policies and an equal percentage “identity politics” as their main reason.

The extreme left wing in the party put off 19 per cent and weak policies on illegal immigration were mentioned by 17 per cent.

There was difference in support for Biden between Indian Americans born in the US, of whom 71 per cent support him, and those born abroad with 66 per cent of them supporting him. Both categories of Indian-Americans showed uniform level of support for Trump at 22 per cent.

The analysis foresaw a growing trend in the community towards liberalism e and the Democratic Party.

It said: “Looking forward, each year, approximately 150,000 Indian-Americans will become newly eligible to vote through naturalisation and the rest are children of immigrants reaching voting age.

“Given these demographic trends, and the more liberal leanings of US-born Indian-Americans, it is likely that the median Indian-American voter will become even more inclined to the policy stances of the Democratic Party.

“If curbs on immigration to the US continue, that trend could intensify even further.”

The IAAS poll covering 936 Indian-American US citizens was conducted between September 1-20.