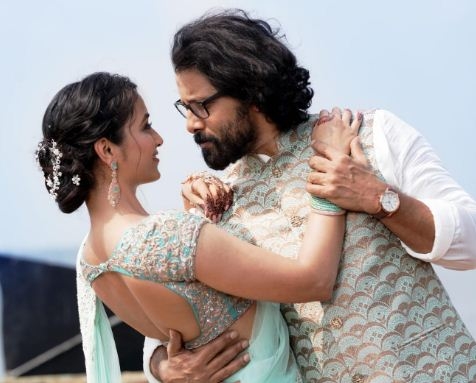 Director Ajay Gnanamuthu’s ‘Cobra’ is an intense but lengthy action entertainer that manages to impress you in parts.

The first half of the film is more of an action entertainer while the next half has equal doses of action, drama and family sentiment to offer.

The story begins with Rishi (Roshan Mathew) a ruthless business tycoon who fears no one, having a stand off with the Chief Minister of a state. Drunk on the power his business empire provides him, he orders the assassination of the Chief Minister who was looking to thwart his plans of business expansion.

Rishi’s most potent weapon is a person nicknamed the Cobra (Vikram), a brilliant mathematician whose identity even Rishi does not know.

Rishi’s instructions are communicated to the Cobra, whose real name we get to know is Mathi, through a journalist (K. S. Ravikumar) and they are carried out with precision every single time.

The Chief Minister’s assassination is soon followed by the assassination of the Prince of Switzerland and the Defence Minister of Russia.

The only common factor in all the assassinations is the usage of mathematics, that is cleverly employed by the assassin. Hot on the trail of this assassin is not just the state police but also the Interpol, of which Aslan Ilmaz (Irfan Pathan) is a part.

Feeding secret information to the Interpol about the assassin is an anonymous computer genius, who delivers clues about who the next target of the Cobra is.

As the Interpol arrives in the country to gather additional information from the state investigating agencies, the hunt for Cobra intensifies.

Do the law enforcement agencies succeed in their mission of nabbing the Cobra? Why did the Cobra turn an assassin? What happens to Rishi on whose behest the assassinations are carried out? Cobra answers all these questions and more…

A lot of thought has gone in to the film’s story and its making. But unfortunately, that is exactly what works against it.

The plot of the film is so intricate and so complex that viewers have to keenly watch and pay attention to every development on screen, including the dialogues. One small miss and there’s every chance that the plot may well go over your head.

The first half of the film is fast and action-oriented and one is able to relish it. The second half is actually where the problem lies. It is distinctly different from the first and focuses on the introduction of a new character called Kathiravan (Vikram) that makes it exceedingly difficult for audiences to follow the developments.

Nevertheless, Vikram dazzles as both Mathi and as Kathiravan. He gives us a glimpse of that magnificent acting which he displayed in ‘Anniyan’.

Both Anandraj and Vikram perform the very same body movements without looking at each other, even as they deliver the very same lines. Their actions are perfectly in sync with one another and leave you stunned.

The background score is sometimes so loud that it overpowers the dialogues being spoken, making it difficult for audiences to follow proceedings.

Harish Kannan’s visuals are stunning and a delight to watch.

One wishes the editing was a bit tighter as the run time of the film is a whopping three hours and three minutes.

On the whole, Cobra is a decent action entertainer which is impressive in parts.