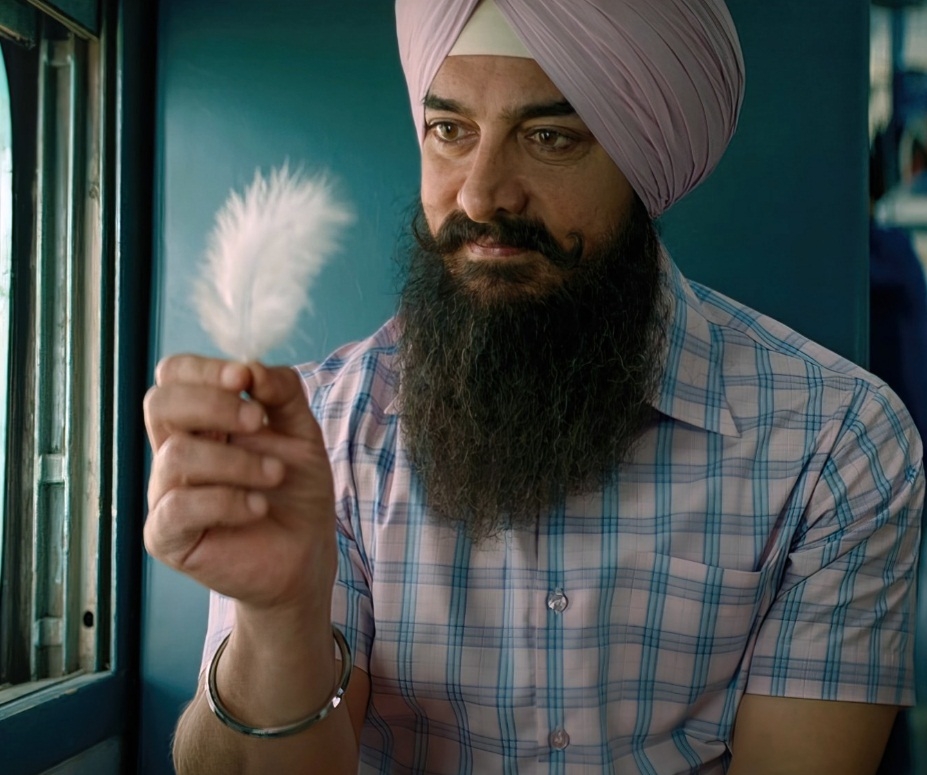 Aamir Khan’s stardom is an interesting phenomenon. The man takes his own sweet time to make films and when he completes and releases one, it draws the attention of an entire nation. His success ratio only adds to his massive credibility as the superstar who rarely fails, barring of course in few exceptions such ‘Mela’ and ‘Thugs of Hindostan’.

So, when the news of him putting together the remake of Tom Hanks’ 1994 classic ‘Forrest Gump’ came out, it set the domino effect that reached its culmination with the release of the film. It has made a huge noise, which its makers are looking to convert into theatre footfalls, which have proved to be rather slow and sometimes elusive for recent Bollywood releases.

Much like its original, ‘Laal Singh Chaddha’ tells the story of a simple man and how he sails through life with his goodwill and values. It opens with the song ‘Kahani’ (crooned by Mohan Kannan), played against a rural landscape as a bird’s feather glides through different locations before it lands at the titular character’s feet.

The film manages to hold audience to their seats, a rarity in the present crop of Bollywood films, which are failing to hold people’s attention. The script has been penned by actor Atul Kulkarni, who has worked with Aamir in ‘Rang De Basanti’, and is his dear friend. It has been crafted really well, except for the love track of the lead characters which drags the otherwise it down in parts and doesn’t come across as naturally woven into the story.

Kulkarni compensates with the rest of the story as the film moves swiftly through landmark events in India’s recent history, perfectly weaving them into the film’s storyline, from the end of the Emergency to India’s historic 1983 World Cup victory, Operation Blue Star and Indira Gandhi’s assassination, Mandal Commission, Ram Rath Yatra, 1993 Mumbai bomb blasts, and the Kargil War. The narrative courses seamlessly through these tectonic events.

The film’s director Advait Chandan, who has been a long-time collaborator of Aamir in different capacities, has done justice to Kulkarni’s script. The combat scenes in Kargil have been neatly executed. Certain scenes, in fact, really make an impact and register well with the viewer.

The performance by the lead does disappoint a little. The signature brilliance of Aamir Khan seems to be missing in the dialogue-led scenes, but he puts his strengths to test with the scenes where there are no dialogues. He speaks with his face and eyes, and in these scenes, creates a hypnotic effect on the audience.

Mona Singh, last seen in an Aamir Khan-starrer in a bit role in ‘3 Idiots’, does a creditale job as his screen mother (a tall order, considering that the redoubtable Sally Field played the role in the Hollywood origininal). She’s outstanding as a stong single mother and farmer who drives a tractor through town, and firmly believes that her supposedly unequal son deserves every equal opportunity.

Kareena, as we have come to expect of her, is steller as the Monica Bedi-like gangster’s moll character and Aamir’s love interest, even though this track of the film is not too well-developed. She’s the perfect answer to the stripper-dopehead Jenny of ‘Forrest Gump’.

Tollywood’s Naga Chaitanya, who is known in the north of the Telugu-speaking states only for his high-profile divorce with Samantha Ruth Prabhu, effortlessly fits into Bubba’s role from ‘Forrest Gump’. Bubba becomes Bala, Aamir Kargil War partner who co-creates a ‘chaddi-banyan’ company with his comrade.

The production design doesn’t stand out as much as it should for a film that is set against contemporary history. Pritam’s music is good in parts. ‘Phir Na Aisi Raat Aayegi’ is perhaps the best song from the album. It’s a track that grows with time as Arijit Singh’s voice lends weight to it.

Lyricist Amitabh Bhattacharya seems to be a little lost in the film. Known for giving tinsel town some of the most iconic, sensible and quirky tracks, Amitabh was expected to give ‘Laal Singh Chaddha’ an athemic track, but he seems to have taken a back seat.

‘Laal Singh Chaddha’ should strike a chord with audiences, who must watch it despite what the trolls say, and if it does, it will finally end the creative dry spell that the Hindi film industry is experiencing at present.

After seeing this film, one wants to say, like the Aamir character after having his favourite gol gappas, “Pet to bhar jaata hai, man nahin bharta (The stomach is full, but one wants more).”