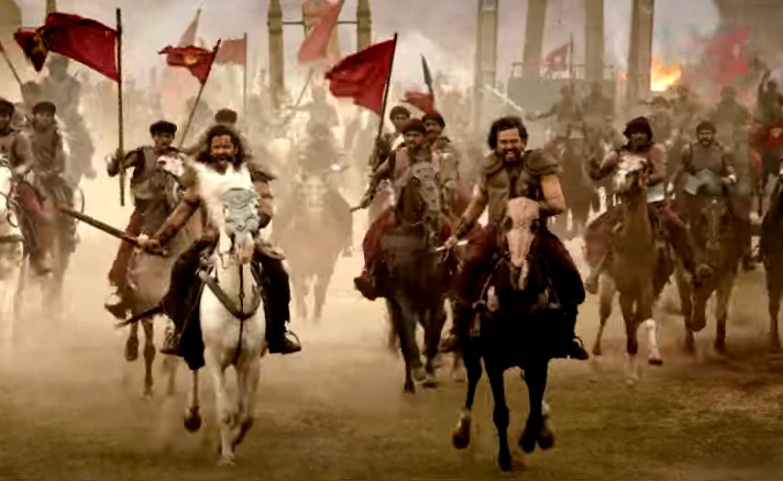 Make no mistake about it, Mani Ratnam’s ‘Ponniyin Selvan – Part I’ is a masterpiece that deserves all your adulation and love.

The auteur does a phenomenal job of bringing to life the exceptional characters of eminent writer Kalki’s finest creation, ‘Ponniyin Selvan’.

The beauty of Part one of the two-part film lies in the fact that Mani Ratnam has not only made the story concise but has managed to do so carefully, taking adequate care not to dilute the essence of the novel or its charm.

He narrates with flair the intense and gripping story that has all elements ranging from bravery to conspiracy to romance to revenge to loyalty and manages to showcase the multiple layers of most of his characters.

The story begins with a comet appearing over the Chola skies almost a 1000 years ago. The Oracles predict that the comet will claim the life of someone from the royal family of the Cholas. That means the lives of Emperor Sundara Chozhar (Prakash Raj) and his sons – Aditha Karikalan (Vikram) and young Arun Mozhi Varman (Jayam Ravi) are in danger.

While Aditha Karikalan, who has already beaten the Pandyas and the Rashtrakutas, is now heading to Kalinga for his next conquest, his younger brother, Arun Mozhi Varman is leading a naval campaign to Sri Lanka.

While the brothers are busy expanding the Chola empire, there is danger lurking close to the Chola kingdom.

Aditha Karikalan, who is aware of backstabbers and betrayers, learns from his spies that a conspiracy is being hatched against the Royal family at the Kadambur fort back home.

He chooses his trusted aide and close friend, Vallavarayan Vanthiyathevan, a gifted warrior with a glib tongue and a sharp presence of mind, to head back to the Kadambur fort and find out what is being plotted.

Vanthiyathevan soon arrives and learns that a conspiracy is being hatched to pronounce Madhurantakan (Rahman) as the next crown prince by the finance minister Periya Pazhuvettarayar (Sarath Kumar), who is controlled by his wily wife, Nandini (Aishwarya Rai Bachchan), who has her own loyalties.

The danger doesn’t stop there. While a conspiracy is being hatched inside the kingdom for the throne, the defeated Pandyas, who are craving revenge, have unleashed a group of assassins who make it their life’s mission to kill the Chola emperor and his princes.

Director Mani Ratnam scores in almost every department, right from the casting. There is not a single actor who looks out of place.

Jayam Ravi as Arun Mozhi Varman is just perfect. Strong, dignified, loyal and brave, he does a fantastic job and steals the show despite appearing only in the second half of the film.

Vikram as Aditha Karikalan is magnificent. Courageous like a lion, he roars his way into our hearts as he conquers kingdom after kingdom. Vikram plays his part with so much conviction, it is easy to see that the warrior prince is choosing to go to battle repeatedly to ease the excruciating pain and disappointment he is suffering from not being able to live with the love of his life.

Karthi as Vanthiyathevan and Jayaram as Azhawarkadiyan Nambi complement each other beautifully and their portions together are a treat to watch. Karthi does justice to the role of Vanthiyathevan, scoring on all three counts – a die-hard romantic, a smooth talker and a fearless warrior.

Aishwarya as Nandini and Trisha as Kundavai steal the show. Both ladies along with Aishwarya Lekshmi as Kuzhali, are just outstanding in their respective roles.

A. R. Rahman’s magical background score is what binds the entire movie as one and lifts its already high standard by another notch.

Ravi Varman’s visuals are nothing less than stunning and spectacular. In fact, they are so good that this film can just be watched just for its visuals.