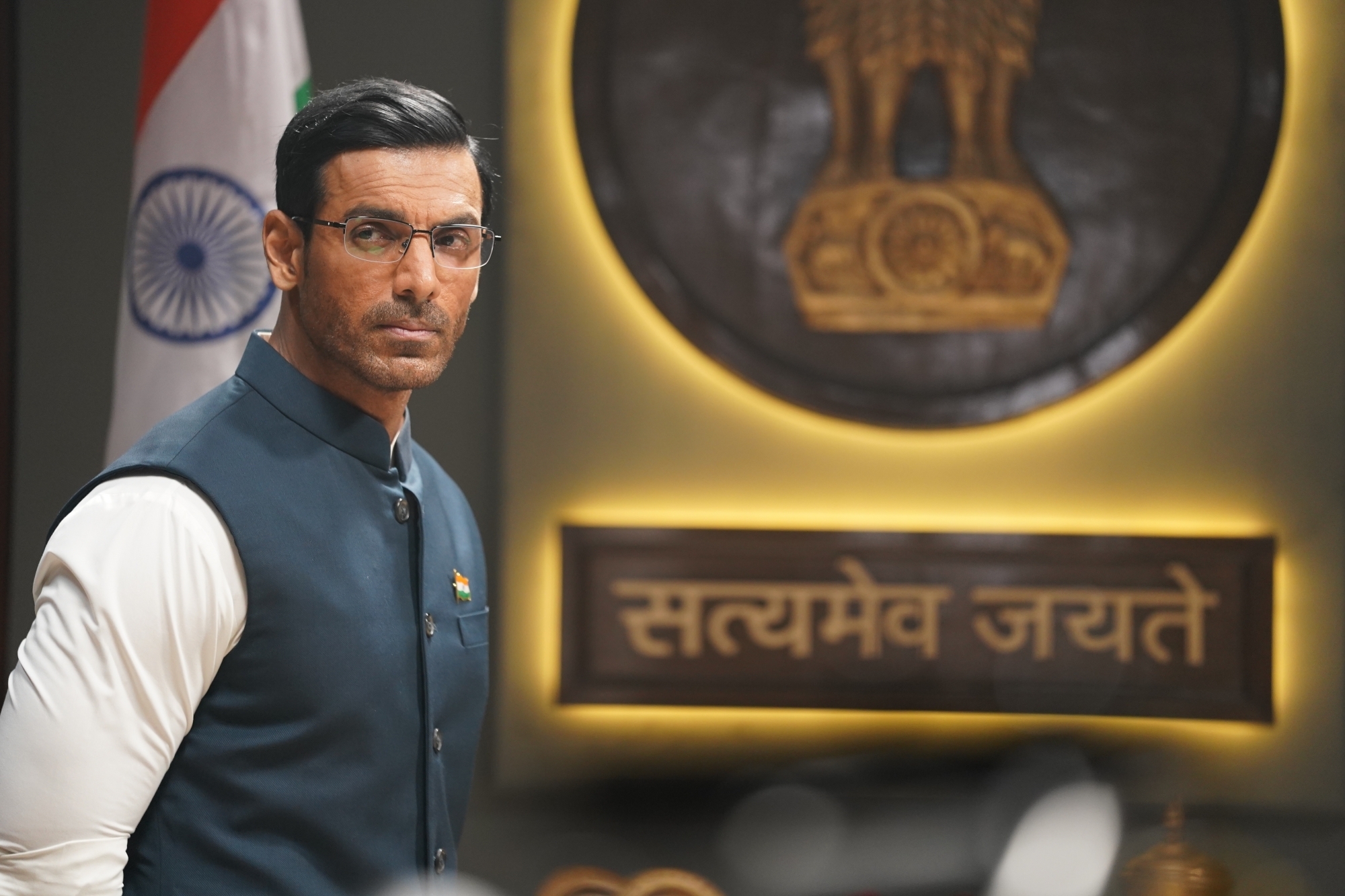 Review: ‘Satyameva Jayate 2’ caters to an audience of a different era (Rating: **1/2)

This second edition of ‘Satyameva Jayate’ boasts of a larger-than-life projection from its very first frame. It is a fantasy or masala film catering strictly to the masses, where one needs to leave their sensibilities behind to enjoy it. Despite this, the film is a tedious fare.

Set in Lucknow, and narrated in a non-linear manner, ‘Satyameva Jayate 2′ is the convoluted story of the Azaad family, where Dadasaheb Balram Azaad, a righteous farmer fighting for the farmers’ rights is killed during the farmer’s agitation, but not before saying, “Yeh desh main, corruption mitega ya mera lahu bahegae”

Twenty-five years later, his twin sons; Jay an officer in the police force and Satya a politician, are his torchbearers, who, when not performing their respective professional roles moonlight as hooded vigilantes and at the very onset of the narrative state, “Ab ya toh corruption mitega ya beimaan ka lahu bahega!”

The duo is compared to Ram and Laxman from the Mahabharata, and similarly, the conflicts are dramatised and blown out of proportion and most of the action sequences are interrupted with a prayer or with the playing of the national anthem in the background.

This makes the entire proceedings appear mawkishly sentimental. Adding to the list is the banal and blatant incorporation of religious festivities and the twins adorning their orange and green outfits in the climax.

As mentioned earlier, sensibilities aside, the script is laden with cinematic liberties that want to make you cringe. A case in point is when Jay and Satya’s mother Suhasini, who was in a coma for 25 years, suddenly comes to her senses, leaves the hospital, and lands up where the action is taking place. Apart from this, at one stage, the telling is more of an absurd comedy than an action film.

Except for the fans of John Abraham who would be thrilled with getting a triple dose of their favourite action hero as Dadasaheb Azaad, Jay, and Satya, the others would wince seeing too much of a non-performing actor.

John has a good screen presence, and he looks good in ‘poser shots,’ but his acting abilities are highly questionable. Emoting is not his strong point, and this can be noticed when his lips do not sync with the lyrics in the songs or when he mouths his dialogues sans emotions.

Divya Khosla Kumar as Satya’s wife Vidya and Gautami Kapoor as Dadasaheb’s wife Suhasini, are earnest in their delivery.

Harsh Chhaya as the Chief Minister and Vidya’s father along with Anup Soni and Zakir Hussain in their respective roles are perfunctory in their acts. As seasoned actors, they do not add any nuances to their characters.

Mounted with exuberant production values, each frame of the film is poster perfect but the loud deafening background score along with the absurd narrative mars the viewing experience.