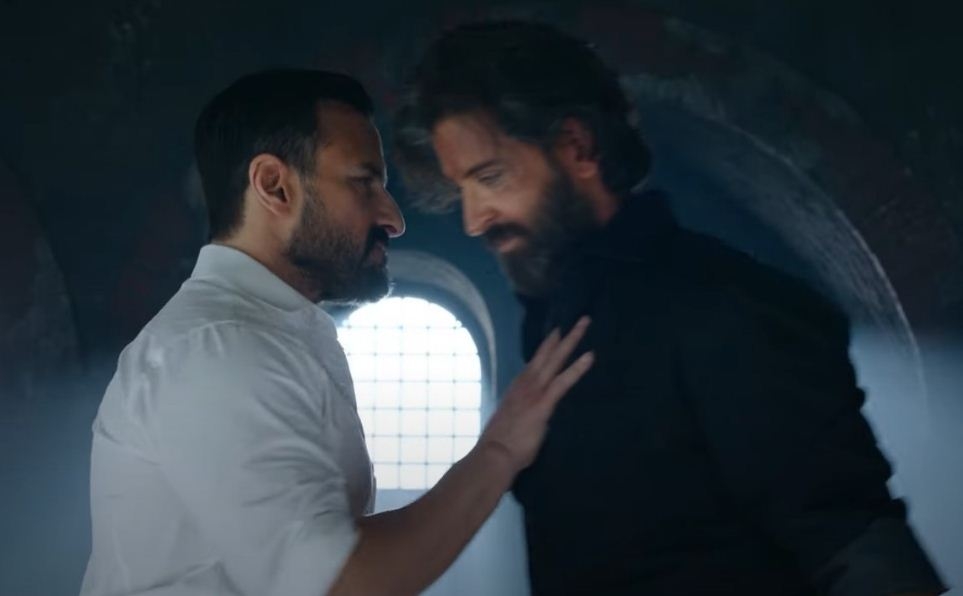 Mumbai, Sep 29 (IANS) At a time when only content from South India seems to be working at the box office, Bollywood has come up with a story in the form of ‘Vikram Vedha’, which has its roots in a Tamil hit film and a two-hero structure much like the earlier release of this year, ‘RRR’, which turned out to be a blockbuster.

The film, which has two of Bollywood’s best-looking men — Saif Ali Khan and Hrithik Roshan — in titular roles, is a remake of the 2017 Tamil film of the same name, which saw Tamil cinema’s Makkal Selvan (‘national treasure’) Vijay Sethupathi and R. Madhavan in action.

The husband-wife director duo Pushkar-Gayathri, who helmed the original, has steered the Hindi version too, changing the backdrop to Kanpur and Lucknow.

Saif plays the encounter specialist Vikram, who learns about the grey nature of humans and the vehicle for this epiphany is Hrithik’s character of Vedha. This is perhaps the first time that Hrithik plays a menacing gangster on screen, and boy, he does it with absolute finesse!

The actor, who has been mostly cast in urban roles, returns to the grunge and rustic dimensions with Vedha after his 2017 release ‘Super 30’, and seems to be owning the screen, be it in the high-speed shots or the rack focus from his gun-holding arm to his face in his intro.

There are hardly any body shots of Hrithik flexing his muscles, yet he shoulders the film with his portrayal. A little more work on the North Indian accent and diction by the actor, though, could have taken the film a notch higher.

If Hrithik’s Vedha is the simmering volcano waiting to unleash destruction. then Saif’s tough-as-nails cop Vikram is the tornado that acts as the counter force to Vedha.

Their camaraderie on screen is a delight to watch, something that can be summed up with the line, “That’s what happens when a tornado meets a volcano” from Eminem and Rihanna’s track ‘Love The Way You Lie’.

Radhika Apte reunites with her ‘Sacred Games’ co-star Saif. She plays Vedha’s defence lawyer, who is at a cross-roads in her life along with her husband Vikram.

A mass entertainer, the film shows some sturdy technical work, especially the pithy camerawork. The lines between right and wrong blur in the film, so the cinematographer P.S. Vinod effectively brings out the essence of Kanpur and Lucknow as he holds the pulse of the leading lines in his frames.

The Awadhi architecture and the complex lanes of the cities have been so beautifully captured by the cinematographer that he does merit a shoutout: “P.S. (Vinod), we love you.”

The film also features a taut background score, which is very urban in its approach with a generous use of guitars and drums with prominent kick and tom punches.

The music and choreography, though, are the weakest links of the film. The songs obstruct the narrative flow and play absolutely no part in advancing the plot. If the music is forgettable, the choreography is absolutely disastrous. To do that when you have Hrithik performing for the camera is an unforgivable crime.

‘Vikram Vedha’ could further salvage Bollywood’s reputation at the box office after ‘Brahmastra’ if it strikes at the right chords. By the looks of it, it will.