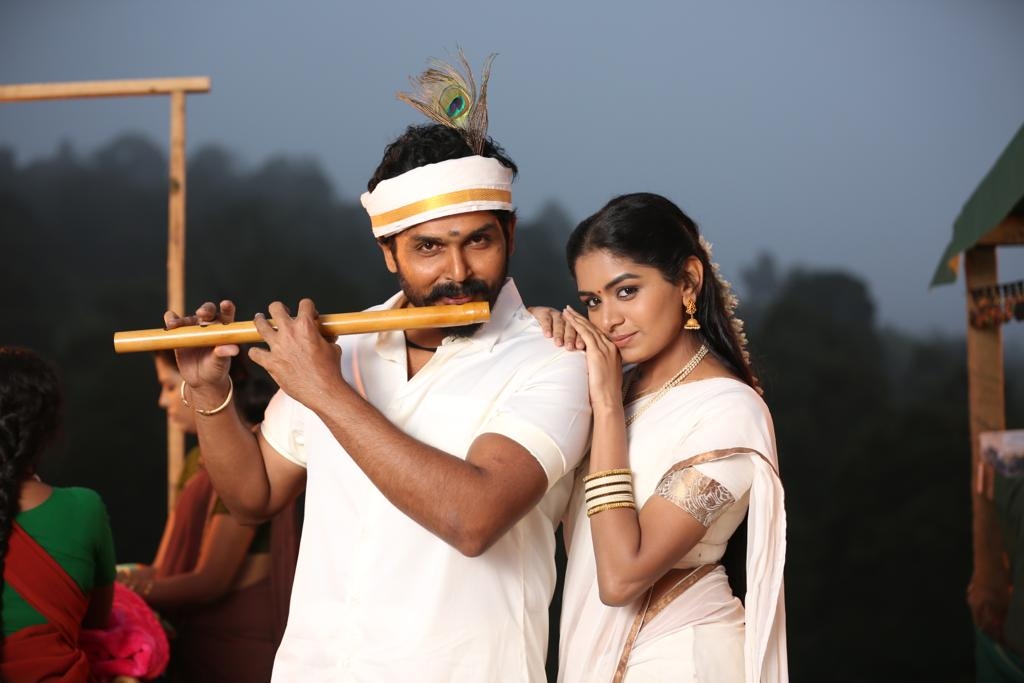 Director Muthaiah, who is known for making wholesome commercial entertainers, is back with another such entertainer in ‘Viruman’.

Like most of his previous films, the story of this film too has a rural backdrop and tries to showcase the strength of relationships in a family.

The film begins with a young boy chasing his dad with a dagger in hand to kill him. Eventually, we learn that the boy, Viruman ( Karthi), is the fourth son of Muniyandi (Prakash Raj), a Tahsildar by profession.

A young Viruman tells in court that he wishes to stay with his uncle (Raj Kiran) rather than with his father after the death of his mother. The court grants his desire and young Viruman grows up in his uncle’s place while his three brothers grow up at his father’s place.

Director Muthaiah, who highlighted the beauty of a good father-in-law, son-in-law relationship in ‘Komban’, now tries to showcase the bond between a powerful but selfish father and a rebellious but good son who attempts to reform his dad who believes that money matters more than relationships.

Muthaiah is an expert when it comes to making such family dramas that have adequate portions of romance, action, comedy and drama and he has just proved that once again with ‘Viruman’.

The film is engaging from scene one and does not disappoint you right till the very end. Apart from a good plot, the film also has a brilliant cast that breathes life into the story.

Karthi as Viruman is just perfect. Fearless and arrogant on the one hand and deeply loyal and affectionate on the other, Karthi plays the part with flourish. The manner in which he celebrates a thug slapping his dad in public and how he chooses to reward the thug with a golden ring is just hilarious.

Actress Aditi Shankar, the daughter of ace director Shankar who makes her debut with this film, is just a natural when it comes to acting. She looks very convincing as the character ‘Thaen’ and is absolutely at ease in front of the camera. She does a neat job of playing a hard-working, no-nonsense girl who believes in standing up for her rights.

Raj Kiran, one of the veterans who has delivered several commendable roles before, comes up with yet another powerful performance in this film. As Karthi’s uncle, Raj Kiran delivers not just a mature but a majestic performance.

Prakash Raj, who plays Karthi’s dad, as always comes up with a clean and memorable performance.

The film’s background score by Yuvan Shankar Raja deserves special mention. Especially, the BGM when Karthi is introduced is just peppy and accentuates the mood of the scene. Throughout the film, Yuvan’s music plays a crucial part in amplifying the mood.

Selvakumar’s visuals in the film are a mixed bag. While some visuals are striking and neat, some others, especially those right at the beginning, seem dull and devoid of adequate lighting.

All said and done, Muthaiah’s ‘Viruman’ is an entertainer that wins your heart!