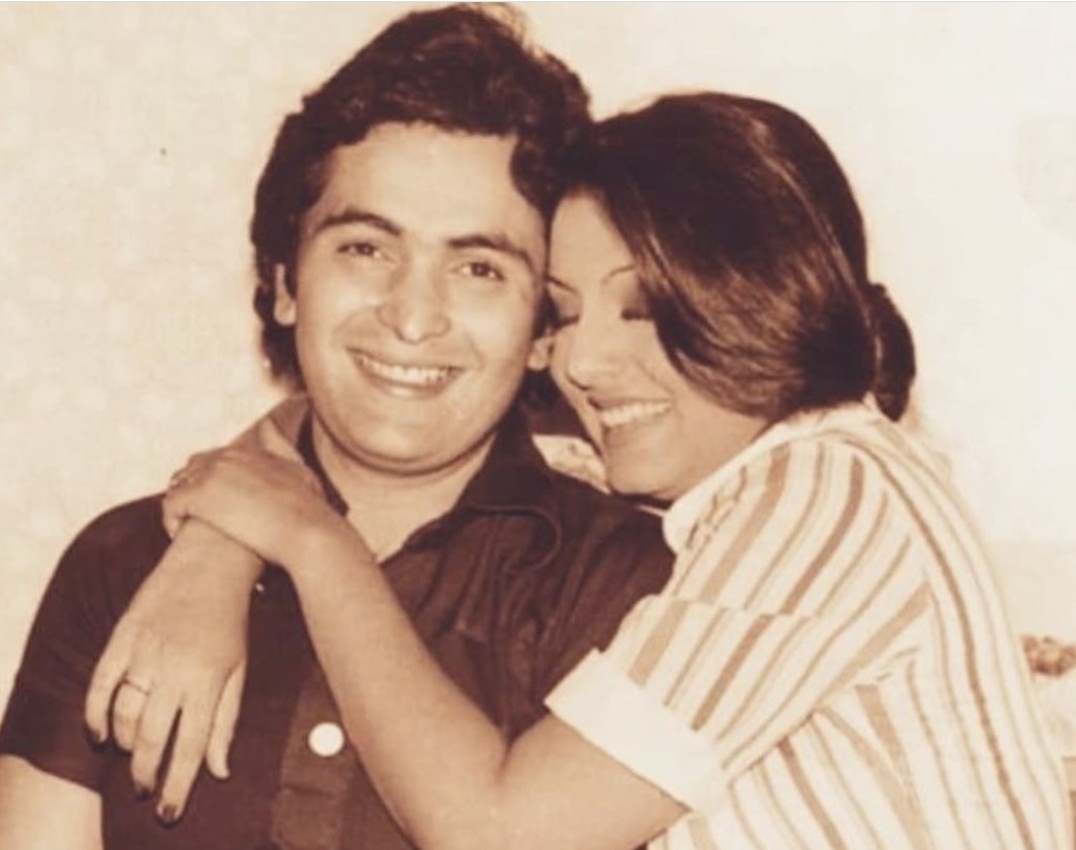 Because I cannot visualize him without her warm presence, I chose this endearing picture of Rishi Kapoor and Neetu Kapoor to share my thoughts.

Things happen in strange ways. Ajit and I try to watch a movie every night (after a long day of mental work, healing work, consulting work between us two) just to unwind.
And out of the blue, three- four days ago we decided to watch Do Dooni Char. It had the couple playing a reel life couple as well. And you could see the comfort level between Rishi and Neetu Kapoor in that film. It made reel life look even more real.

I also picked up his autobiography Khullam Khulla which I had bought a few years ago as soon as it came out, and started re reading it.

I used to send random tweets to Rishi Kapoor, now and then, because I loved his outspoken candor.
And his was an endearing and active presence on social media.

My only meeting happened when Rishi Kapoor came to Afghanistan with his father Raj Kapoor in the early 70s.

I heard hushed stories that one of the only two prints of his film Bobby had been smuggled out of India to Afghanistan. And that their dual charm helped in the return of the print, but only after “Bobby”, was screened there.
I wasn’t really into movies as a kid, so thought nothing much of that brief meeting.
But as a young teenage journalist I began to see the huge impact Rishi Kapoor was creating as the quintessential romantic hero. How he held his own against other powerful performers.

I was a kid when Rishi Kapoor won his first award, and that too the National award in his debut, for “Mera Naam Joker.”

A movie way ahead of it’s time, it flopped initially but now enjoys a cult status.
But who can forget Rishi Kapoor’s coming of age performance in that film.
Then came “Bobby” and there was no looking back.

Like all Kapoor films, his had stellar songs as well!

And what a natural dancer. Who can forget the iconic Karz. I also loved all his movies with Neetu. There was an easy chemistry and joie de vivre in their interactions. We would often compare her with the effervescent Geeta Bali. The charm and warmth she portrayed was as infectious.

I don’t think people realized that Rishi, was thrown into a rough arena, where often, his romantic, chocolate boy persona was at direct odds with the characters being written for the new angry young man on the block..yep that guy on the threshold of super stardom.. Amitabh Bachchan.

And not just that but the other action heroes, the incredibly handsome and talented Vinod Khanna and the charismatic and equally talented Shatrughan Sinha were hard on his heels as well. 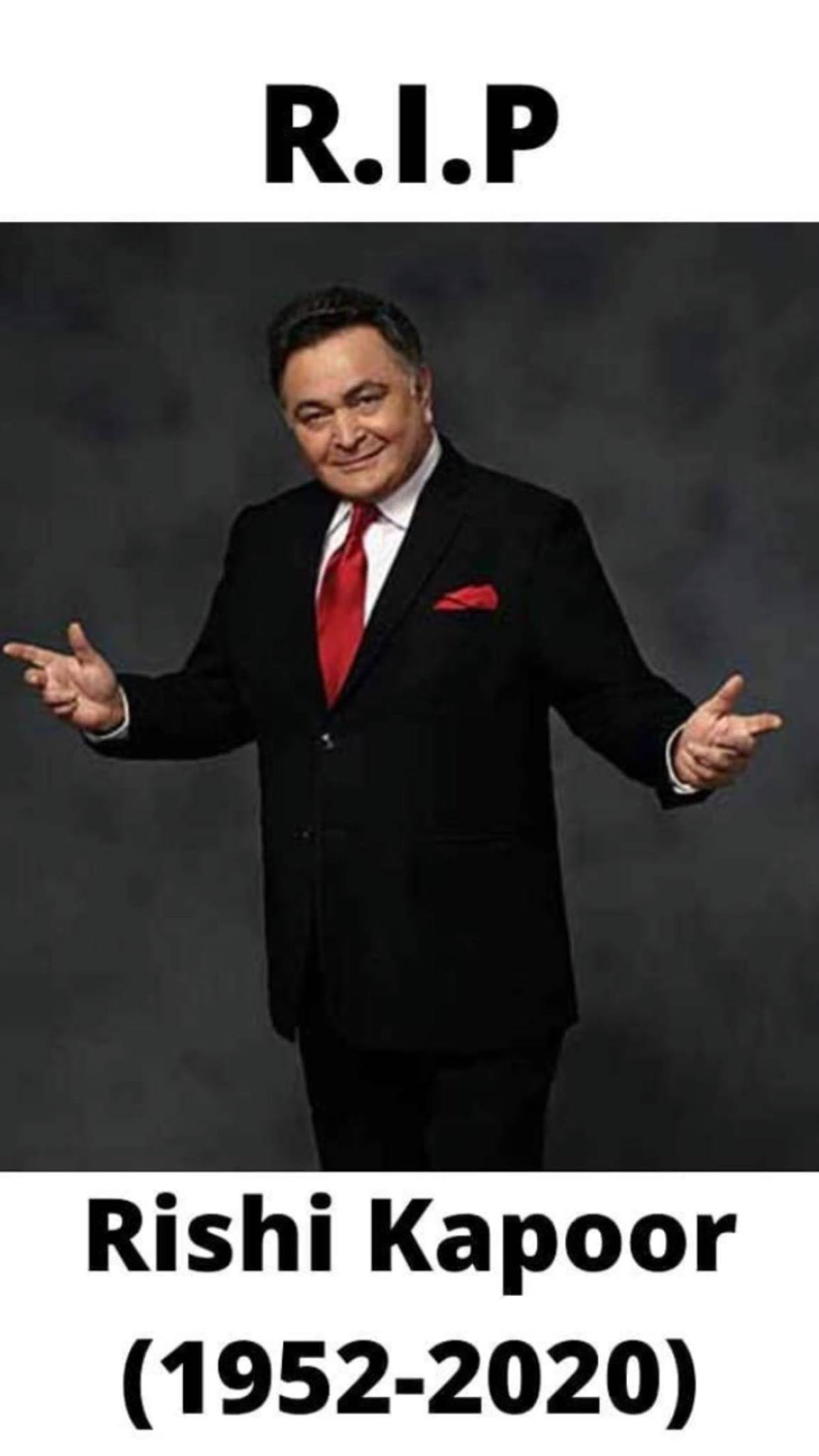 To have carved his own niche and make his presence felt,had nothing to do with nepotism, or being a Kapoor, but everything with being a stellar actor.

An actor who was loved for five decades by his fans, who went from chocolate boy hero to the evil Rauf Lala in Agneepath. It shows his mettle at his craft. His immense versatility.

The changing face of Cinema in the last two decades gave him roles, he never would have been offered when he started out.

I just happened to see ” The Body” on Netflix a few days before “Do Dooni Char”. And I can honestly say it was because I saw Rishi Kapoor’s name in the credits.
If you saw Rishi Kapoor mentioned, you knew it would be something of substance.

I followed him on Twitter, not just for his humor, his candor, his take on things, his witty scolding an out of line fan, but mostly for his joie the vivre, which was infectious.
His tryst with cancer, was handled with courage, and Neetu, his rock again became his cheer leader and human angel, helping him fight a valiant battle. The love of family, fans continued their support.

I loved it when Neetu or Ranbir, or some of his friends posted videos and pictures while he was undergoing treatment in NY. Positive, happy pictures, that gave us hope even when we knew inside how rough things can be.

I loved it when he sang to Vikas Khanna Main shayar to nahin, but after eating food cooked by him “mujh ko shayari aa gayi”, or Neetu and he serenading a Hello seated in the backseat of a cab with Anupam Kher.
Or Sonu Nigam and him laughing together.

We became those flies on the virtual wall as life was being shared by those close to Rishi.
We all felt his joy, when he finally returned home after an 11 month stay in NY.

Social media, the right kind, creates a huge virtual family and envelops you in prayers, blessings and warmth.
Just a few days ago I was telling Sonu Nigam ji, that fans who worship their idols, love them with everything they have, accept them as they are, something even family members don’t do. And to see how much Rishi Kapoor was and continues to be loved by everyone, family, friends and fans warms my heart.
His father the great Raj Kapoor gave a message through this song on the screen

The son has truly done just that.

Feels so surreal. This is truely the end of an era #RishiKapoor pic.twitter.com/rWjVfknX2H

Reach out Kavita Chhibber at