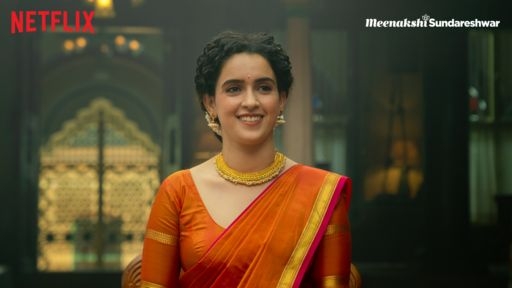 Mumbai, Oct 22 Actress Sanya Malhotra says she is organically attracted to light-hearted romantic comedies, and that’s probably the biggest reason for her to do the film ‘Meenakshi Sundareshwar’.

Sanya Malhotra along with co-star Abhimany Dassani, filmmaker Vivek Soni and entire Netflix and the Dharmatic creative team were at the trailer launch of ‘Meenakshi Sundareshwar’ in Mumbai.

Talking about her reasons for picking up ‘Meenakshi Sundareshwar’, which is a romantic comedy about a newly-wed couple facing ‘LDR’ – Long Distance Relationship, Sanya said, “The romantic bit of the script made me choose it. Because as an audience I am also craving to watch romance, nowadays I am organically attracted to light-hearted romantic comedies, so that was the main reason I was attracted to the character and script. For me, it was love at first sight with Meenakshi’s character. I also wanted to work with Dharma Productions, it was my dream.”

Sanya will be seen playing the role of a south Indian girl from Madurai. So when asked about playing the Madurai girl on-screen despite being a Punjabi, she added, “The role being difficult, see every character has its own journey, as an actor you have to do your homework before you step in front of the camera. But I think Vivek Soni was really helpful and we did a couple of readings before going on sets that really helped me to know my character really well. The script is very well written so the material I had as an actor sorted it out for me. I was really confident that I will be able to do it.”

The film features new filmmaker Vivek Soni and co-actor Abhimany Dassani, who is just one movie old, so we asked Sanya if that added any extra responsibility to her shoulders.

She said, “I don’t think about that at all, when I’m doing a film or approaching a character. Things like these don’t come to my mind. It might be there consciously but it doesn’t show on the forefront, that what might be my responsibility. Being an actor was my dream, I am living my dream, and I am happy with that.”

‘Meenakshi Sundareshwar’ is backed by Karan Johar’s Dharmatic Entertainment. Starting November 5, it will stream on Netflix.