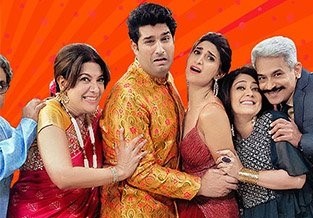 Quite simply, this is your show if you were missing Yeh Jo Hai Zindagi, or Dekh Bhai Dekh, or Sarabhai V/S Sarabhai.

Rohan Sippy’s Sandwiched Forever brings back an era of sitcoms that you would think got buried somewhere beneath loud family melodrama and toxic reality TV. The show harks back to a time when fun on the tube was a lazy deal, about simplistic characters playing out the simplified quirks of life in a feel-good set-up, with canned laughter for impact.

This is the story of Naina (Aahana Kumra) and Sameer (Kunaal Roy Kapoor), a young couple starting out in life. It’s ‘opposites attract’ for the two, actually — Naina, feisty and full of life, would seem like the perfect foil for her absent-minded and admittedly lazy other half Sameer, a game developer.

Naina and Sameer are very much in love, but their woe lies elsewhere – their parents, who are doting but domineering, too. Things really get messed up for the duo when, following a bizarre twist of fate, Naina and Sameer end up living in an apartment flanked on either side by the residences of their respective parents.

Over the years, the basic formula that makes a sitcom click has not changed — it should deliver a gag a minute. Rohan Sippy faithfully adheres to the theory. The writing of this show is genuinely funny. Realising the impact of humour often lies in brevity, Sippy has ensured the eight episodes play out over an optimum runtime of around half an hour or so each.

Adequately shot despite the fact that the series wholly unfolds within three indoor sets — for the living rooms of the three apartments – and crisply edited, the show somehow manages to work despite having no palpable USP.

Written and executed to avoid looking at the complexities of life, the narrative creates scope for the cast to be funny. Kunaal Roy Kapoor does an okay job as the bumbling Sameer, though Aahana Kumra could have gone slower on the facial expressions she pulls in a bid to appear funny.

The scene stealers, though, are the on-screen dads — Zakir Hussain as Sameer’s father and Atul Kulkarni as Naina’s father are a riot, without overdoing it. Their acts are balanced by Divya Seth Shah and Lubna Salim as the mothers respectively.

Sandwiched Forever is the sort of show you can watch wherever, whenever — and wish it was funnier. A second season wouldn’t be a bad idea, though the humour could be sharper.