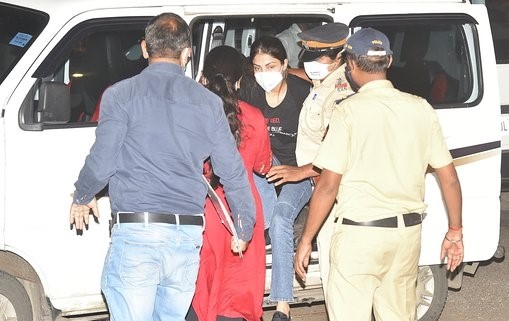 New Delhi, Sep 12  Two leading newbie heroines and a fashion designer also a friend of a leading male actor are said to be under the scanner of the Narcotics Control Bureau (NCB).

Actress Rhea Chakraborty who is being interrogated by NCB and is under arrest is said to have taken three names of these leading actresses and a fashion designer.

Rhea is said to have made these confessions that these three ladies did drugs with her and late actor Sushant Singh Rajput. While one heroine was known to Sushant, the other was friends with Rhea.

Rhea has told the agencies that 80 per cent of Bollywood stars are on drugs. There are also reports that NCB is set to summon 25 prominent Bollywood stars in the drug investigations.

Rhea in her statement to NCB had accepted her role in procuring drugs for Sushant, and also handling the finances.

During her statement, Rhea Chakraborty revealed about her involvement in procurement of drugs and financial transactions and also her instructions to Samuel Miranda, Dipesh Sawant and Showik Chakraborty.

“These deliveries used to be received by the aides of Sushant Singh Rajput and every delivery and payment was in conscious knowledge of Rhea Chakraborty and even some times the payment and choice of drugs was confirmed by Rhea,” Showik said in his statement.