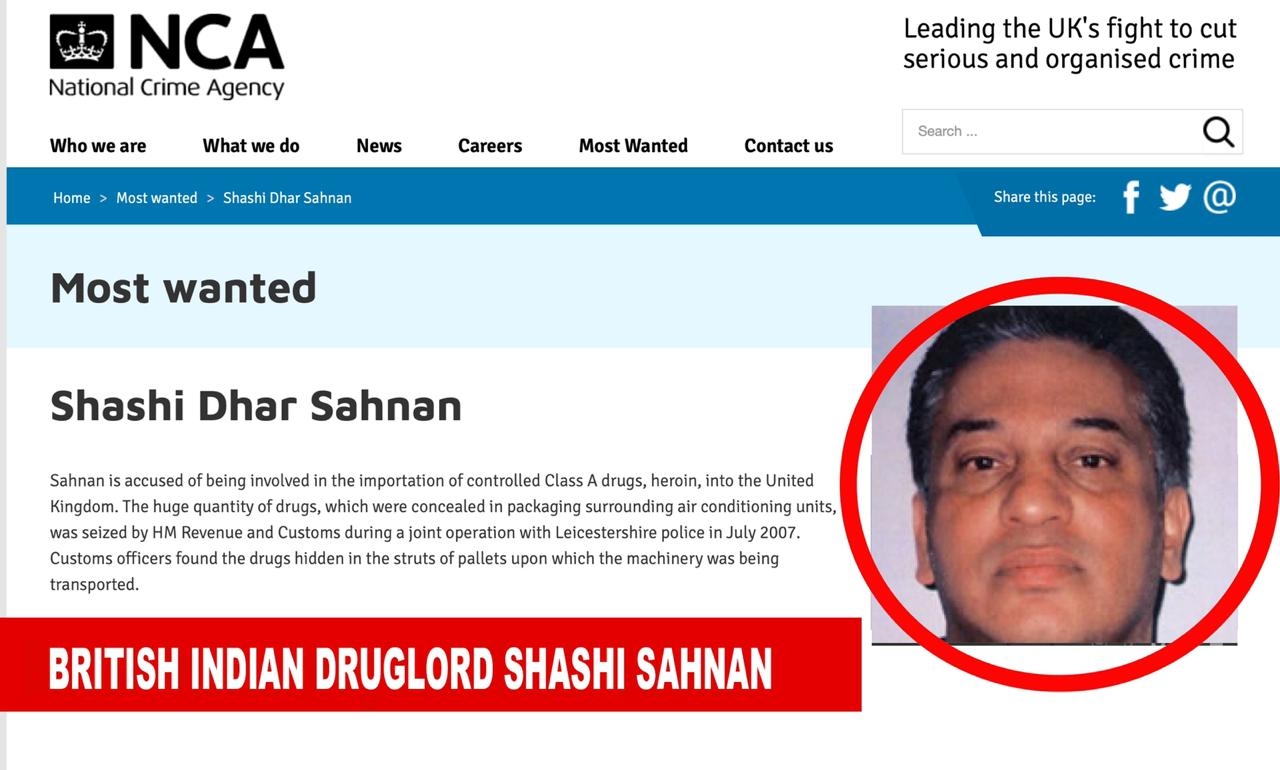 London/New Delhi, July 5 Underworld don Dawood Ibrahim’s notorious D-company is on the radar of UK authorities for drug smuggling, but at the moment, British Indian drug kingpin Shashi Dhar Sahnan is the most wanted fugitive in the UK. The UK’s National Crime Agency (NCA), which leads the fight against organised crime, rates Sahnan’s gang as one of the biggest crime syndicates in smuggling heroin in Europe.

Born in Indian and brought up in Britain, Sahnan now operates from Spain but still has his family in Leicester. London and Belfast, according to NCA, have been key operating areas of Sahnan’s syndicate.

Sources in the NCA told IANS that there is no concrete evidence to link Sahnan’s drug operations with Karachi-based D-company but Sahnan’s linkages with Indian smuggling groups helped him to smuggle large quantities of the finest heroin into Europe and Britain. Wedged between the world’s two largest areas of illicit opium production, Afghanistan and Myanmar, India has been a major transit route for opium-related drugs, including heroin, to Europe.

NCA and Interpol suspect Sahnan of hiding somewhere in Costa del Sol, an autonomous region, in the south of Spain. A tourist paradise, Costa del Sol is also infamous for crime syndicates, mostly of Russian and Dutch origin, many of whom are involved in drug trafficking. Narcotics baron Sahnan is said to be operating from this place, and pushing drugs into various parts of Europe. For almost 12 years, the UK’s most wanted drug lord has not left his footprint in London, Leicester or other major cities of the UK, despite continuing his nefarious activities.

Investigation into Sahnan’s operations reveal that several of his aides are of Indian origin. Two of his close associates, identified as Babu Sarasia and Bharat Ram Sarasia were arrested in a major heroin seizure, valued at over 1.2 million pounds several years ago.

The compressed heroin was recovered from a car showroom in Leicester. Later, a freight depot in Birmingham was also raided by police and heroin valued at over 1.6 million pounds was seized. The seizures were directly linked with mastermind Sahnan, who, during a nationwide crackdown, managed to escape from the UK.

In fact, heroin smuggling in Britain has been dominated by Indian-origin gangs. A decade ago, Iqbal Mirchi, a close aide of Dawood Ibrahim, was operating clandestinely from a plush villa on the outskirts of London. Though India’s Central Bureau of Investigation (CBI) pursued an extradition case against him, the gangster got relief when the CBI could not present adequate evidence against him in the British trial court.

At present, another Dawood lieutenant Jabir Motiwala, involved in an international drug financing case, is facing extradition trial in the Westminster’s Magistrates court in London. The Drug Enforcement Agency (DEA) of the US has charged him with managing financial deals on behalf of D-company relating to smuggling of contraband narcotics drugs.