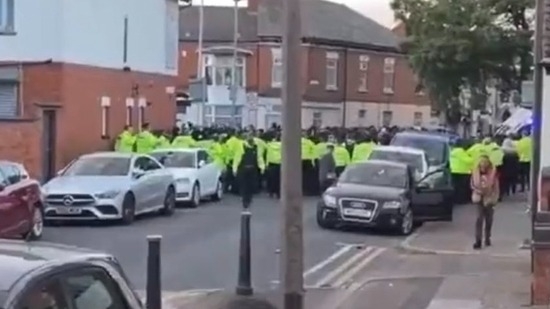 Leicester (UK), Sep 20  Violent clashes between Hindus and Muslims in Leicester were the result of outsiders coming to the city and inflaming existing tensions, community leaders have said, Daily Mail reported.

Over the weekend, police made 47 arrests after clashes between large groups of mostly young men in the east part of the city, as tensions boiled over following a recent cricket match between India and Pakistan.

But the people of Leicester say the relationship between the two communities has been strained for months and has been inflamed by misinformation being spread online and outsiders who have travelled to the city from nearby areas such as Birmingham, Daily Mail reported.

Police officers were diverted from the Queen’s funeral preparations in London to deal with most recent unrest which erupted on Saturday night and continued into Sunday.

So far, one man from Leicester has been jailed for his role in the incident but police have confirmed that a number of those arrested were from outside the city.

Amos Noronha, 20, was sentenced to 10 months in prison after pleading guilty to possession of an offensive weapon in connection with the violence but no further details of his crime were released.

Noronha was one of 47 people arrested across the weekend after the clashes which resulted in 16 officers being injured, Daily Mail reported.

Those arrested stand accused of an array of offences including affray, assault, possession of weapons and violent disorder.

Dharmesh Lakhani, who has lived in the city for more than 50 years and works with local mosques, says he feels it was outside influences that inflamed the situation.

“Now my personal feeling is that if it was just people from Leicester, things would have calmed down.

“I feel there’s outside influences here and they’re not welcome. We really need just the people of Leicester, the Hindu organisations, the Muslim organisations, our authorities, the police and our local council and we could sort this out straight away.”