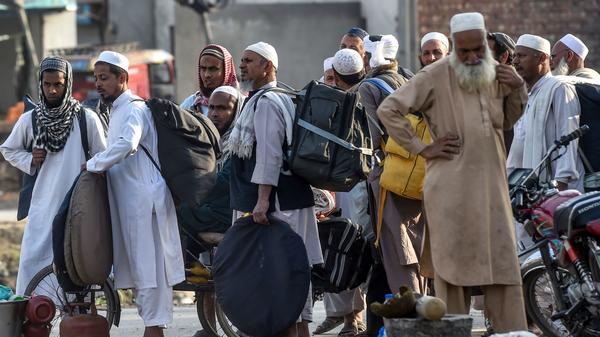 Hyderabad, March 29 Ten Indonesian preachers who tested positive for Covid-19 in Telangana last week and some people of two other nationalities being quarantined has brought Tablighi Jamaat into focus.

The group of Indonesians was on a preaching mission in Karimnagar town. They were brought to Hyderabad for screening and all of them tested positive. It was then the biggest jump was seen in the total number of coronavirus cases in the state.

Alarmed over this, the health authorities rolled out cluster containment plan in Karimnagar, taking up door-to-door screening of people in a radius of 3 km around a mosque where the foreign preachers stayed for two days. Over 25,000 people were screened in the intensive operation undertaken by 100 teams of health personnel.

The authorities heaved a sigh of relief as nobody among the locals showed any symptoms. The inquiry revealed that the Indonesians had boarded AP Sampark Kranti Express in Delhi Aand reached Ramagundam on March 14. From there they tavelled in a private vehicle to reach Karimnagar.

Further inquiries by health officials revealed that some members of the group went to Hyderabad. Eight Indonesians were found in Mallepally mosque in Hyderabad. They were also shifted to a hospital and quarantined. They, however, showed no symptoms of cornonavirus.

This was not the only group of foreign preachers. Twelve nationals from Kyrgyzstan were found staying in Mallepallay mosque, a centre of activities by Tablighi Jamaat. “We took them to a quarantine facility but none of them had any symptoms of coronavirus,” an official of the health department, who did not want to be identified, told IANS.

The presence of 12 preachers from Vietnam in Nalgonda town also sent the authorities into a tizzy. The group was staying in a mosque in the town since March 9 was also not found to have any symptoms of Covid-19.

They had arrived in New Delhi from Vietnam on March 3, reached Hyderabad by train on March 8 and hired private cabs to reach Nalgonda.

Officials said while passengers landing at Hyderabad airport were being thoroughly screened, the Tablighi preachers did not have to go through any such screening as they entered the state by trains from other parts of the country.

The visit by Indonesians and other foreign preachers triggered a row with the right-wing groups demanding a probe. The Vishwa Hindu Parishad (VHP) sought investigation by the National Investigation Agency (NIA).

“The visit to Karimnagar by Indonesians aged 50 to 60 years and infected with Coronavirus has raised lot of doubts. There should be a thorough probe into their visit and the organisations which helped them during their stay,” said VHP Telangana unit Secretary B. Ramesh.

There was no reaction from Tablighi Jamaat, which has no formal organisational structure and shuns media coverage. Its leaders could not be reached out for comment.

Nobody from Jamaat has come forward to speak, but the manager of the mosques where the preachers were staying said they did not violate any law of the land and alleged that some forces were trying to malign the preachers.

Telangana Chief Minister K. Chandrashekhar Rao also said the foreigners had done no wrong. “They came legally to India after obtaining valid visas. They are not infiltrators. The Central government gave them the permission,” he said at a news conference.

Tablighi preachers, both Indians and foreigners, visiting various towns in India for proselytization is not new. One finds such missionary groups staying in mosques even in remote areas, going around and meeting ordinary Muslims inviting them to come for ”namaz” and revive their faith.

Tablighi Jamaat, means group of preachers, was floated by Islamic scholar Maulana Muhammad Ilyas in 1926 in then Mewat province.

Unlike some other Muslim jamaats, it works only among Muslims. It is believed to have millions of active members in more than 150 countries. They invite Muslim community to adhere to the basic tenets of Islam.

The Tablighi network is strong across the Indian sub-continent and people from various walks of life are associated with the organisation.

Tablighi bands of preachers operate from mosques. Announcements that ”Jamaat” has come from other cities and countries are common in the mosques under the control of the organisation. They do ”gasht” or go around in the neighbourhood, interact with Muslims, invite them to ”namaz” and ”ijtema” at the mosque.

The preachers, who usually venture out on 40-day mission, stay in mosques. With congregational prayers restricted in the wake of lockdown, the preachers have vacated the mosques.