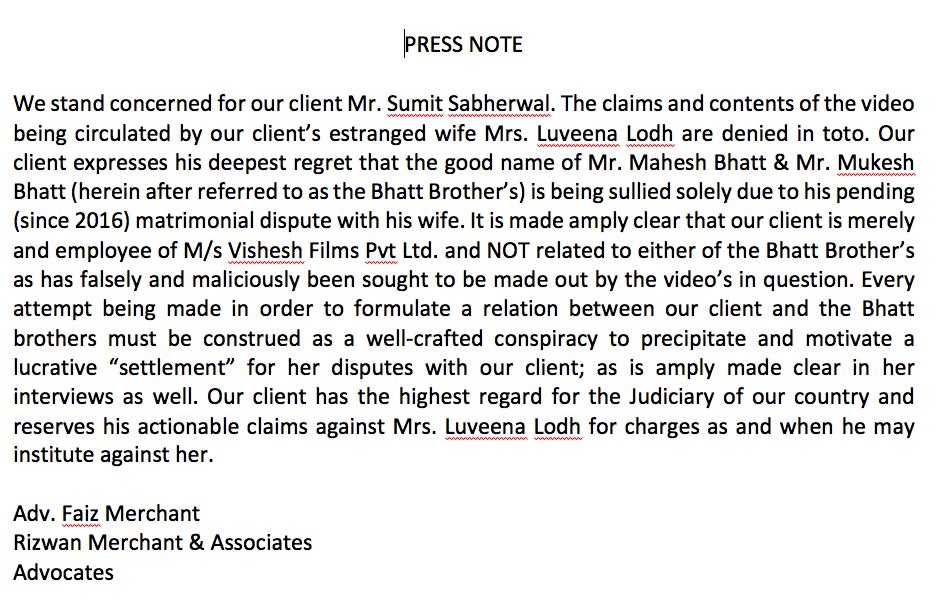 Last week, Luviena posted a one minute, 48-second video on her verified Instagram page claiming that Mahesh Bhatt has been harassing her. She also claimed that she had been married to his nephew Sumit Sabharwal, adding that she had filed for a divorce since he supplies drugs to actors. She also alleged that he was into supplying women and that Mahesh Bhatt was aware of the fact.

She had said: “If something should happen to me and my family, the only people who are responsible are Mahesh Bhatt, Mukesh Bhatt, Sumit Sabharwal, Sahil Saigal, and Kumkum Saigal. People should at least get to know of how many lives they have destroyed behind closed doors and the things they can do, because Mahesh Bhatt is extremely powerful and influential. Thank you.”

Now, Mukesh Bhatt has issued a statement saying: “As mentioned in our defamation plaint submitted in the courts today (Monday), that Mr. Sumit Sabharwal is only an employee in my production company Vishesh Films for over 20 yrs as opposed to Ms. Luviena Lodh’s claims that he is our relative in various media reports and publications.”

He went on to sat that Luviena has “consciously and maliciously orchestrated a campaign along with her benefactors to nefariously defame and besmirch the good name and reputation of my brother and myself with the sole and ulterior motive to garner publicity in the hopes that the same would motivate a lucrative out of court settlement in her matrimonial dispute with Sumit”.

“We have the highest faith in our judicial system and intend to see this suit to its logical end,” he concluded.

Reacting to the video, Sumit’s lawyers said in a statement: “We stand concerned for our client Mr Sumit Sabherwal. The claims and contents of the video being circulated by our client’s estranged wife Mrs Luviena Lodh are denied in toto. Our client expresses his deepest regret that the good name of Mr Mahesh Bhatt and Mr Mukesh Bhatt is being sullied solely due to his pending (since 2016) matrimonial dispute with his wife.”

The lawyer also said that Sumit was only an employee of Vishesh films, which is owned by Mahesh and Mukhesh Bhatt.

The statement said: “It is made amply clear that our client is merely an employee of M/s Vishesh Films Pvt Ltd and NOT related to either of the Bhatt Brothers, as falsely and maliciously been sought to be made out by the video in the question.”

“Every attempt being made in order to formulate a relation between our client and the Bhatt brothers must be construed as a well-crafted conspiracy to precipitate and motivate a lucrative ‘settlement’ for her disputes with our client; as is amply made clear in her interviews as well. Out client has the highest regard for the judiciary of our country and reserves his actionable claims against Mrs Luviena Lodh for charges as and when he may institute against her.”