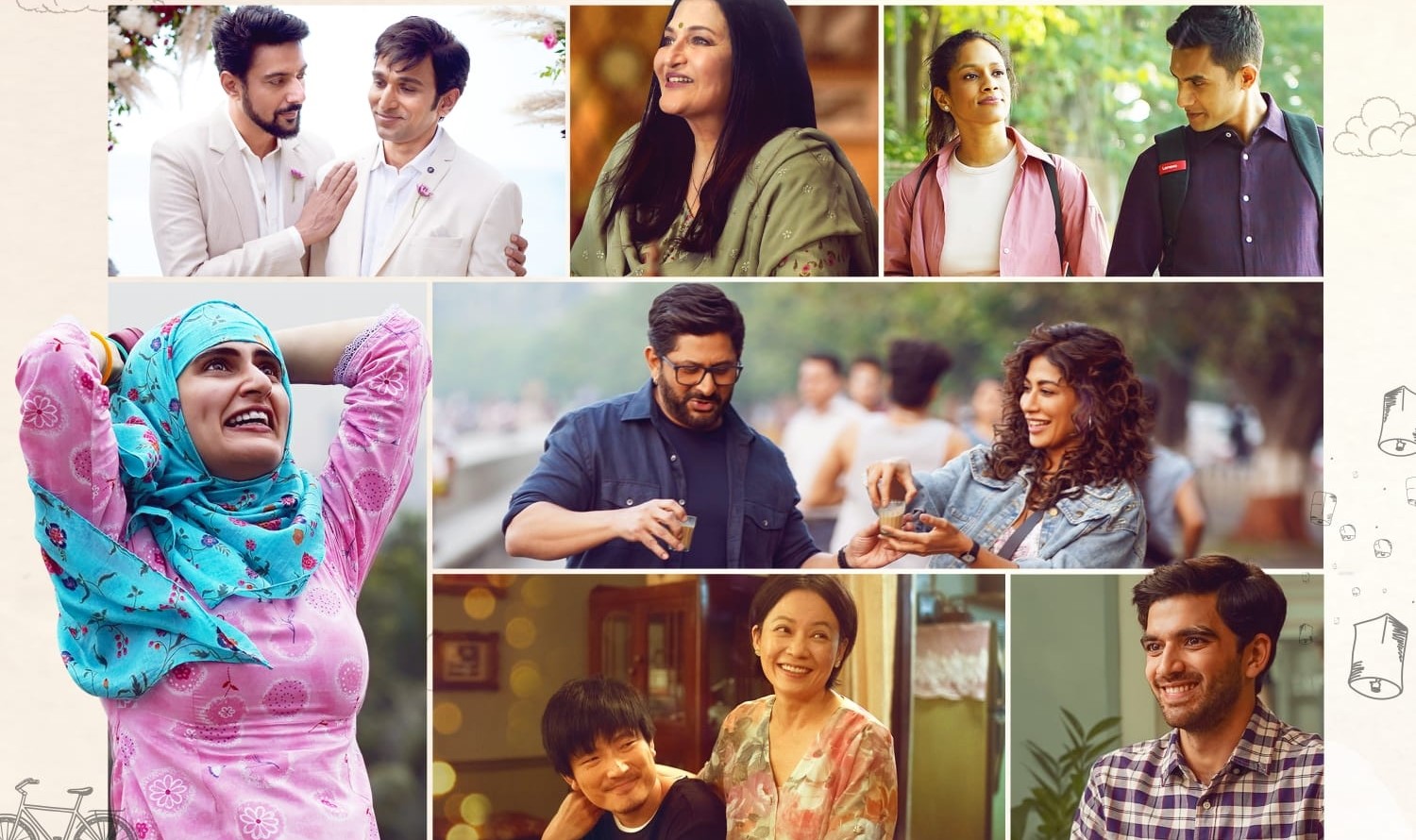 'Modern Love Mumbai' album brings together talent from across the country
Movie Reviews
·May 13, 2022

‘L-O-V-E’ – is a familiar four-letter word that takes on a world of meanings. It is transcendent and everyday – found in every nook and corner of living, and the only reliable thing about it is that it is never where you expected to find it.

This is so evident in this series, which is an anthology of six diverse yet universal stories inspired by personal essays from the New York Times column of the same name. Despite certain elements being fictionalised, there is nothing “modern” about these stories or their presentation of ‘love’.

The series begins with an offbeat story – ‘I love my wrinkles’ directed by Alankrita Shrivastava, featuring Sarika in the lead as Dilbar Sodhi – the centre of attraction for a young man, essayed by Danesh Razvi.

With an athletic disposition and aspiring for a good “job”, he seeks her mentorship in soft skills, over the time he is mesmerised by her, and he blatantly confesses his infatuation. As the narrative unravels, the premise appears forced, and love appears distant and superficial. The canvas too is mediocre, and the performances of the characters are perfunctory.

Please do not let this episode put you off the series. The stories that follow are notches better.

The second episode, helmed by Hansal Mehta, titled ‘Baai’ – referring to the grandmother of the protagonist Manzu (Pratik Gandhi), is a same-sex love story.

Traumatised by the violence of the Mumbai riots and later being ousted as a gay by a close relative, how Manzu, a restaurant singer, finds Rajveer (Ranveer Brar), a chef, the love of his life forms the base of this episode.

The riot scene, with long takes, is brilliantly choreographed – but the mutual attraction and on-screen chemistry between the two leads is a bit flat, resulting in two cardboard characters romancing. While probing into the inner life of Manzu, the plot fails to give equal weightage to the magnetic pull of his partner. Similarly, the unconditional love of Baai is obligatorily captured.

The third episode, ‘I love Thane,’ directed by Dhruv Sehgal tells us the tale of landscape artist Saiba, played by Masaba Gupta. It tells us how romance blossoms between Saiba and Thane resident Divik (Ritwik Bhowmick).

The plot meanders with, “I think I need to give my life another chance, you know,” to “Maybe to live life through love is the only way of experiencing it.”

Technically, this episode is on par with the first episode.

‘Mumbai Dragon’- the fourth episode brilliantly directed by Vishal Bhardwaj, is the anchor episode of the series, despite it not gelling with the ‘modern’ theme of the series.

It is a delightfully over-the-top, absorbingly staged exploration of a mother’s love for her son and the son’s inclination towards his girlfriend, whom his mother can’t stand.

Meiyang Chang plays Ming, a wannabe singer who is encouraged by his Jain girlfriend Megha (Wamiqa Gabbi) to pursue the career of his dreams. His mother, essayed by the talented Yeo Yann Yann, is disheartened on learning that her son has taken a sabbatical from his career- in dentistry to become a singer, and makes life difficult for him. Naseeruddin Shah plays a Chinese-speaking Sardar, a family friend, who tries brokering peace between the mother and son.

There is nothing ‘modern’ in this love story, but the relatable performances along with the organic progression and inter-cultural differences of the characters are what keep you glued to the screen. Plus, the effectively meaningful and heart-touching lyrics of the songs in this episode elevates the viewing experience.

Equally charming and affecting- is Shonali Bose’s ‘Raat Rani’. It is the story of Lali and Lutfi, a Kashmiri couple in Mumbai. This episode is Fatima Sana Shaikh’s canvas as she essays her role to perfection, embodying the spirit of the migrants in Mumbai with a gutsy never-say-die attitude.

The last episode is Nupur Asthana’s ‘Cutting Chai’, telling us the love story of Latika an aspiring author, and her husband Daniel Martin. The characters are essayed by Chitrangada and Arshad Warsi, respectively.

While this is a relatively bland story, telling us, “Life is as complicated and as simple as you make it, and it is about choices that one makes in life,” it is the cinematography in this episode- that is arresting. The cinematographer’s lens beautifully captures the interiors of the CST station.

The title, ‘Cutting Chai,’ appears forced into the narrative. Instead, the episode should have been called- aLatika’s late Latif.

Overall, this series, like the city of Mumbai, offers us comprehensive, mixed flavours of love.