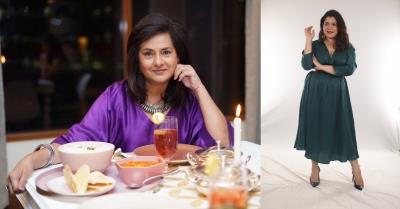 Review: ‘Potluck’: A tamer version of Sarabhai vs. Sarabhai ( Rating: ***)

Film: Potluck (Streaming on Sony LIV); Duration: Each episode is of 24 minutes.

“A family that eats together, stays together.” This is how Govind thinks. He’s the retired patriarch of the upper middle-class Shastri family and he feigns a heart condition to keep his family united and close to him. And thence the narrative gets rolling.

Once a week the Shastris meet for a potluck (a meal or party to which each of the guests contributes a dish).

Govind’s unmarried daughter Prerna (Shikha Talsania) lives with him and his wife Pramila (Kitu Gidwani). His elder son, Vikrant (Cyrus Sahukar), lives with his wife Akansha (Ira Dubey) and their children Zia, Naksh and Saisha (Aradhya, Aarav and Aarvi) in a smaller house in the same locality. Dhruv (Harman Singha), Govind’s other son who is an IT professional, lives with his wife Nidhi (Saloni) in a bigger, luxurious apartment.

The most impressive bit about this series, an otherwise ordinary, light hearted family comedy with bonding issues, is that it makes each member of the Shastri family worth watching. Clingy parents, carefree siblings and their spouses, each one so different from the other, the considerate Alim (Siddhant Karnick), who is Prerna’s love interest, and the cute, loveable grandchildren — each of them is given ample screen time to establish his or her presence.

The traits, quirks and jokes of the characters appear to be an extension of the actor’s own personality and thus they appear be absolutely natural. With characteristic bluntness enthusiastically directed in a positive way, the members aren’t at each other’s throats for the sake of jokes or the plot. Similarly, no decision in the house is an easy one. The confusion, disagreements and varied opinions make the viewing interesting despite the narrative having a predictable flow.

With titles such as ‘Size Does Matter’, ‘Better Best Forgotten’, ‘Nagin to Nevla’, ‘Once Upon A Time’, ‘Honest Mess’, ‘The Three-Step Masterplan’, ‘Two Lies and A Truth’ and ‘It’s All Good’, each episode is fairly interesting with lots of takeaways on a moderate graph. The episodes, with a runtime of about 25 minutes each, moreover, appear too short to allow us to enjoy the entertainment quotient.

The first episode is a bit of a drag, but the series picks up momentum from the second onwards, and the third, which opens with a split screen showing the three siblings having an online conversation, is bright and cheerful. It is the “chai-biscuit” analogy in the same episode that is simply wonderful. And the fifth episode, with large dollops of emotional tropes, is a mess of a different kind. Overall, this series, a tamer version of ‘Sarabhai vs. Sarabhai’, is a fun watch.

(Troy Ribeiro can be contacted at )