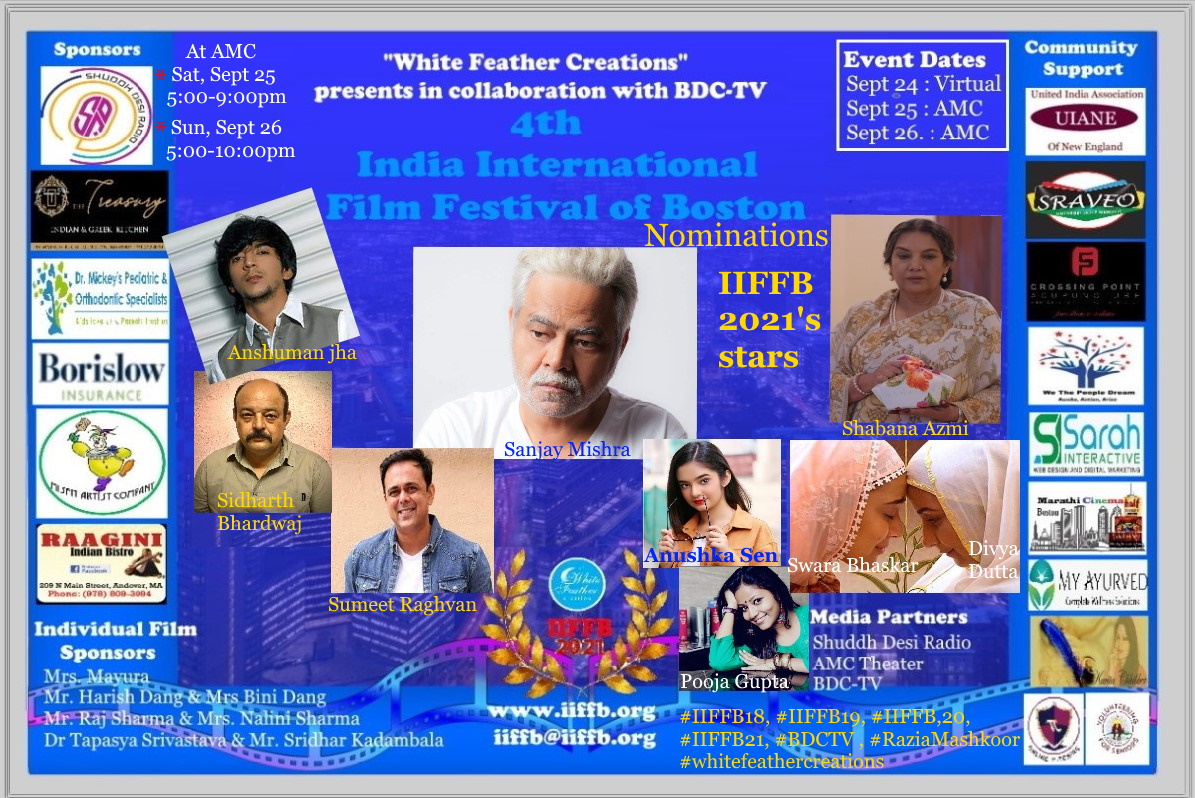 On behalf of the programming committee, it is my pleasure to share the top 3 nominations for the various categories for this year’s IIFFB 2021.

“It was a difficult task, as there were many outstanding entries. However, here they are! And we congratulate the many artists that made these submissions. – Dr. Suraja Roychowdhury”

Our judges Dr. Suraja Roychowdhury, Ms. Meera Siddharth and Dr. Rohit Chandra shared this list of nominations. On behalf of #IIFFB we are thrilled to officially announce the nominations.

Best Social Cause Film:
Am I Next (Winner)

In addition, the following award winners are being announced:

Pride of India IIFFB 2021: Last year, Covid gave us an opportunity to salute our front line workers and some heroes from our community. Our first ‘Pride of India’ 2020 went to the Michelin Star Chef Vikas Khanna, who distributed millions of meals.

This year, ‘Pride of India’ award goes to “Vibha Foundations” #IIFFB2021 New York based Indian foundation who are feeding and educating the needy in India.

The Friends of India IIFFB 2021 goes to Jonathan Hollander. Mr. Hollander is an American dancer, choreographer, educator, and artistic director. He founded the Battery Dance Company in New York City in 1976, opening the Battery Dance Studio in same year. He spent three months in India as a Fulbright Lecturer on Dance in 1992. Hollander curated “PURUSH: Expressions of Man,” a program celebrating male performers representing various classical Indian dance styles including Bharata Natyam, Kathak, Kuchipudi, and Kathakali. He co-founded the Indo-American Arts Council in 2000 in New York City and served on its Board until He also represented the U.S. performing arts field at the Inaugural Conference on Soft Power in New Delhi in December 2018.

The Friends of India IIFFB 2021 Award goes to Vision-Aid. This exemplary nonprofit provides a comprehensive range of devices, training and services which aim to enable, educate, and empower the visually impaired. Vision-Aid programs have won national and international awards and brought positive impact to many. This Boston-based Indian non-profit organization run by 2019 India New England Woman of the Year Revathy Ramakrishna and her husband Ramakrishna Raju puts on the cultural show of the year in Boston, orchestrated by Shri Madurai R. Muralidharan.

Winners in the other categories will be announced at the closing night Sunday September 26, 2021. Gala Night will start at 5:00 PM with social hour and red carpet, followed by a screening of 5 short films.

Looking forward to seeing everyone there!

Be our “Patron” to support & be a part of team IIFFB.
Patron link: https://iiffb.org/buy-tickets/