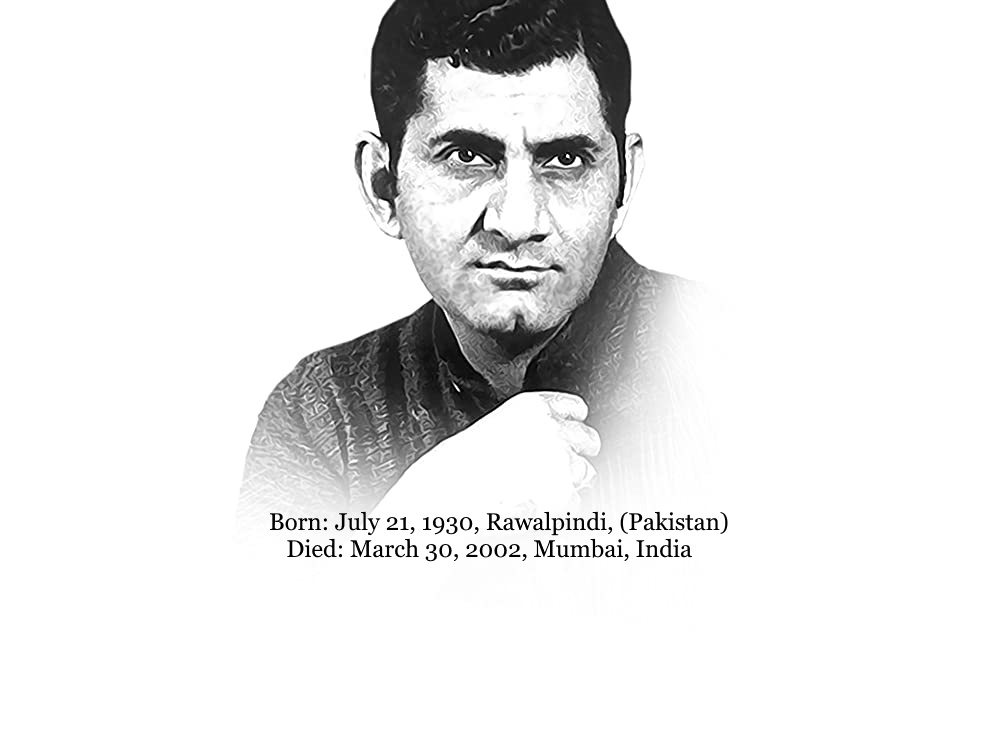 SALIM KHAN PAYS HIS TRIBUTE TO HIS FRIEND, ANAND BAKSHI

A child born in a tiny village in Punjab (Rawalpindi) was named Anand (Happiness) Bakshi (To gift) by his parents; and all his life he gifted happiness to millions of his listeners.

When a child is born in India, the parents not only give him an appropriate name according to his star sign, but also get his Destiny Chart prepared by an astrologer.

This is no ordinary custom, as it could be an image and reflection of a life time.

Some people who believe in superstitions keep a weak or inappropriate name for their child, as I have known of many billionaires who have names which when translated mean opposite to their financial status and I also know of poor people who have names that translate to being a person of immense wealth.

But some people prove in their life time that they were rightly named. A child born in a tiny village in Punjab was named Anand (Happiness) Bakshi (To gift) by his parents; and all his life this poet gifted happiness to millions of his musical listeners. He was gifted with the talent of writing poetry that enthralled millions of people in his life time of 72 years and professional life span of more than 50 years. Even just before the period of his Death he completed his life’s mission of spreading happiness amongst his music lovers and listeners. Very few people are as fortunate and as gifted to be able to fulfill their destiny on Earth with such flair and style as the late Anand Bakshi.

During the period of Indian Independence very few socialists poets wrote film songs, like poet Josh Malihawadi, Sahir Ludhianvi, Kaifi Azmi, Shailander. The poets of that period were colored with colors of Indian Nationalism. And they were Politically colored too, the effect of which we heard in their film songs too. To be attached to the Politics of the State, or to have belief in a particular ideology is not incorrect. Every poet has a right to his or her belief and conviction.

All these above named poets have written wonderful songs, but Anand Bakshi was never influenced or attached to any socialist or Political ideologies. He was first and foremost a film song writer who was completely immersed and his writings emerged from the characters and the narrative of the film’s story. He didn’t have and aspire for fame in the world of Poetry, but he was amongst the very best in the world of Film songs.

His success in writing film songs could make one feel that he took birth only to fulfill his destiny of being the best lyricists.

Child of a middle class family, he admitted himself in the Army, but such was his fierce ambition in poetry and music that he came to Bombay to become a film poet.

In that period there were already great established poets like Shakeel, Shailendra, Majrooh, Raja Mehendi Ali Khan, and Prem Dhawan. There was no opportunity and no one could stand against these giants, especially a meager soldier ambitious to be a Poet.

The many famous music composers of that period already had their own favorite poets and song writers they were happy working with, so there was no scope nor chance of Anand Bakshi breaking through, especially with other good poets like Indeevar and Anjaan waiting to breakthrough much before Anand Bakshi arrived with his pen and paper. But it was the courage of Anand Bakshi that he jumped straight on into the fiery sea of competition where much bigger fish were already the major players.

Anand Bakshi had a great and good sense of music and he even had the gift of capturing and expressing deep philosophies in lesser and simpler words. Slowly but gradually he began to receive work to write film songs. The unsaid rules of the film business say there is no dearth of people in this business who will not value the warm and brilliant rays of the rising Sun and worship it.

When Anand Bakshi was knocking on the doors of success and they were yet to begin opening completely, at the same time there appeared on the horizon the rising Sun of Laxmikant Pyarelal. The musical duo and geniuses recognized the talent in Anand Bakshi and soon made him their favorite and preferred lyrics writer. The triangle of Anand Bakshi, Laxmikant, and Pyarelal, rewrote the musical history of Hindi film songs.

Anand Bakshi respected music composer Anil Biswas tremendously. Bakshisaab told me of an incident when he met Anil Biswas. Bakshi expressed his desire to work with Anil Biswas. Anilda had confidence in Bakshi’s abilities as a poet, and looking at the Harmonium in his music room he regretted “I feel as though I have lost the music within me. There was a period when this Harmonium gave birth to melodies and sang for me the moment I touched it. But sadly it has not happened lately. I now await the day my Harmonium will return to me along with the melodies that have left me, we shall certainly work together.” This was what he expressed to Bakshi.

Bakshi was a very simple, non pretentious, and sincere man. He had a phobia for air travel and travel in enclosed lifts of high rise buildings. The claustrophobic and small lifts made him fear traveling to meet work mates or friends who worked or lived in high rise buildings. He climbed high on the steps of life and reached the pinnacle of success climbing every step of life on the strength of his talents. He was not one who would have used any sort of machine other than his talent to rise high in this world.

It was the deep culture and the strong roots of his simple village in Punjab that beat in his simple heart, that’s why he never found himself lost in the mega dream city of Bombay, the path to his dreams but a jungle of illusions and obstacles. His simplicity and humility was his strength that kept his head above water even though he tasted success consistently, year after year.

His humility was also the very bridge that helped him crossover into the hearts of the people of the heartland, his rural listeners, along with his urban and international non resident Indians. He forged ties with both the hearts and the minds of his listeners all over, by use of simple everyday spoken words carrying the deepest philosophies. 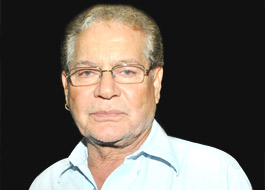 His simplicity was so sincere that he would often invite himself to my home by saying, “Because you live on the first floor and one does need to travel by lift to reach your home, and since your beloved wife Salma cooks the most delicious meals, I am coming over for a meal at your Home tonight.”

He was unique in the sense that normally in the world of show business I experienced that most celebrities and people hide their true intentions. Unlike Bakshi, their hearts don’t reflect what their mind speaks.

Once Bakshi narrated an incident to me.

A successful and famous English writer had an unfinished poem. The last paragraph was left unfinished in spite of many attempts. He realized he needed help to finish his poem. One of his friends recommended that he travel to a distant village and there he will find an old writer who has the talent but was never recognized for. But he is high on self esteem as he knows he is worthy even though he didn’t get fame.

The successful writer was surprised that the old writer finished the incomplete poem so quickly and in a few words. He removed his check book to pay the old writer and hesitated while paying the old writer the contracted amount of 500 pound sterling. He asked the old writer if he was justified in asking for 500 pounds sterling for such an easy job accomplished by him within a few minutes.

The old writer replied, “You are hesitating to pay me because you are not convinced that I should charge you so much money for a job I accomplished with much ease and in a few minutes, even though it’s been done to your satisfaction. You are taking into account the few minutes I took to complete your poem, but you are not taking into account the many years I have lived and experienced life to be able to arrive at this moment in my life which gives me the wisdom and experience to be able to complete your poem. You are only counting these few minutes you have spent with me but not considering the millions of moments I have spent to reach here today. It’s only thanks to the long life I’ve lead that I could accomplish the job for you in a few minutes.”

The successful and famous writer was humbled and humiliated in the presence of the wise writer and immediately paid the writer his fee willingly.

Similarly, Anand Bakshi achieved much fame through the depth in his writing which he earned via his life’s varied experiences. He firmly believed that at every moment life is offering you lessons, but because we are preoccupied with life’s material and physical goals, overwhelmed by our ambitions and challenges in life’s paths, we are unable to absorb the valuable lessons life offers us along side. We have cut short the antennae that helps us pick these signals and lessons of life, and thus we do not recognize the teachings of Mother Nature. Life’s lessons are imprinted in the very grains of sand that we leave our footprints on, but sadly we blind ourselves to them.

This lesson Bakshi taught me makes me recollect, an incident from the film I wrote, “NAAM”. The protagonist in my story has migrated to a foreign land to earn a better living for his family. But he gets trapped in the illusion of ambitions. But he suddenly remembers his Mother and now he badly misses the love of his family back home.

Bakshi understood the pain and suffering of the protagonist so well and he expressed himself in a most popular song, on the strength of which the film did a roaring business. The song helped the film do much better. The song was “Chitti Aayee Hai…” (A letter from Home has arrived, a memory of love has arrived…”.

Before the dawn of his death, from his death bead in the Hospital, Bakshi wrote a song for Subhash Ghai for a yet to release film MAJNU. I was awestruck by the depth of the lyrics when I heard them. It also amazed me that he wrote the song in illness just before Death arrived knocking at his doorsteps.

I believe he wrote so, because writing was not only his religion, but his breath too, his mission for the cycle of life and death, much beyond his destiny. There have been many poets much better poets than him, but he was the most supreme amongst the song writers.

He passed by in march 30th 2002, and since 1957 he wrote more than 650 films and 3500 film songs. He wrote songs for every occasion and relationship of life, even though he didn’t even manage to complete his schooling.

Bakshi was a star born. He became a legend. And legends never die. He lives in his songs and in our hearts.
Presented by Ali Peter John