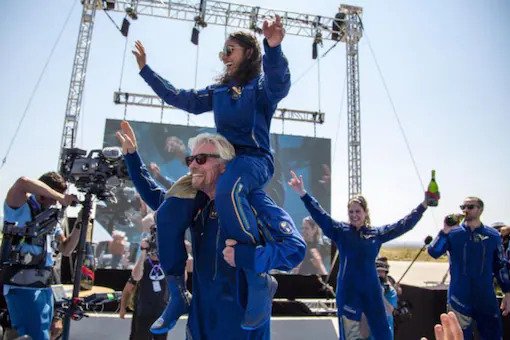 San Francisco, July 12 Virgin Galactic founder, billionaire Richard Branson and his crew completed a successful spaceflight on Sunday. After they returned to earth, Branson carried Indian-American crew member Sirisha Bandla on his shoulders while celebrating their flight to space, at Spaceport America near Truth or Consequences, New Mexico, on July 11. After Kalpana Chawla, Bandla became the second Indian-born woman to fly into space. She was one of the six space travellers aboard ‘VSS Unity’ of Virgin Galactic, which blasted off to space on July 11 from New Mexico. As part of the six-member crew alongside the founder of Virgin Galactic Richard Branson, Bandla’s role was that of a researcher experience. The spaceflight made the 34-year-old aeronautical engineer, who graduated from Purdue University, the second Indian-born woman to go into space after Kalpana Chawla and the fourth Indian to fly into space.

Bandla was born in Guntur, Andhra Pradesh and grew up in Houston, Texas, said a report in Economic Times. She started working at Virgin Galactic in 2015 and is currently vice president of government affairs at the company.

“I am so incredibly honored to be a part of the amazing crew of #Unity22,” Bandla tweeted ahead of the flight on July 2.

Virgin Galactic too, shared a photo of the crew with Bandla featuring in it.

Our first fully crewed rocket powered test flight is planned to take place on July 11th with two pilots and four mission specialists including @RichardBranson onboard.

If we were flying your crew, who’d be floating in zero gravity next to you? Tag your astronauts! #Unity22 pic.twitter.com/3FTCls7A4W

The Virgin Galactic Unity 22 spaceflight reached a peak altitude of around 53 miles (85 kilometers), beyond the boundary of space according to the United States, allowing the passengers to experience weightlessness and admire the Earth’s curvature. As the crew spun around, enjoying the surreal experience in space, Sir Richard Branson sent a very special message for the future generation of dreamers.

“To all you kids down there, I was once a child with a dream. Looking up to the stars. Now, I’m an adult in a spaceship with lots of other wonderful adults looking down to our beautiful, beautiful Earth,” an ecstatic Branson said.

“To the next generation of dreamers, if we can do this, just imagine what you can do,” he further added before unlatching his belt and soaking in space with the rest of the crew.