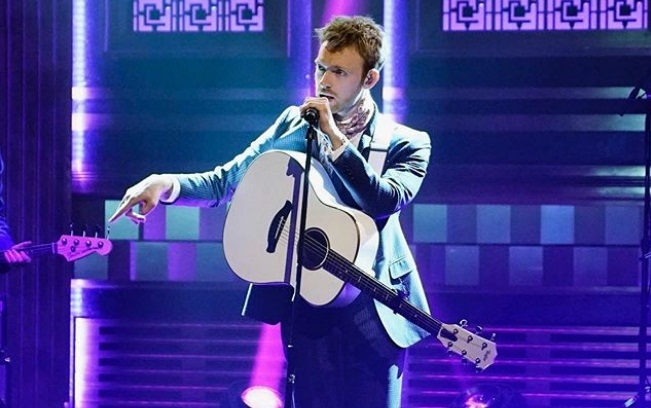 He has co-written and produced the theme track of “No Time To Die” for the upcoming 25th James Bond film.

“It was a dream come true, that’s exactly what it was. I’d always wanted to do a James Bond theme song. I feel so lucky,” FINNEAS told IANS in an exclusive interview.

Asked if there was any extra pressure since it was the James Bond film franchise, which is known for its hit tracks, he said: “Before we had (he and his sister Billie Eilish) written the song, I was like, ‘God, I hope we write something that I think is good’. And then once we’d written the song, to be honest, I knew we had it. I was like, ‘this is absolutely the song for this movie, and I hope they also feel that way’. I felt that it was the perfect song for that. So I feel very pleased that they also chose it.”

He also had a great “I made it” moment when he and his sister swept the 2020 Grammys for their work on the album “When We All Fall Asleep, Where Do We Go?”

“I never really thought I would win any Grammys in my life. I thought I would go through life Grammy-free. The fact that we have won a couple is really crazy and I feel really grateful and thrilled that people like our music that much. I think it’s a great ‘I made it’ moment,” he said.

He became globally popular when his work for Billie started topping mainstream charts. Did he ever feel overshadowed by her?

“I know people compare us and I understand that because we’re related and I produced both records. But I think what’s funny is if I weren’t related to her, the music that I make and the music that she creates wouldn’t be compared because they’re so different from each other. The last thing I would want to do is to make music that sounds just like others. I mean, I want to make it sound like my vision. She wanted to do the same thing,” said the young artiste.

But he has proven that he can stand his own ground in the limelight. His debut solo EP “Blood Harmony”, which was self-written and produced, did well on the Alternative Songs Chart last year.

Working on it was “really liberating” for FINNEAS, who has been associated with a band too.

“When you’re in a band you have to worry about all the band members having a good time playing every song, so you have to write good bass lines and good drum parts and good lead guitar parts. Even if you don’t write them, you have to have a song that your drummer can play a fun part to,” said the young artiste.

“As a solo artiste, I play a lot of piano ballads, and that’s a thing I don’t have to feel bad about. Because when I’m on stage, it’s just me up there and I don’t have to worry about whether anyone else is going to have a good time. I find that really liberating. I think that’s the main difference — as a solo artiste, I can make even quieter, even more simple music. With a band, even quiet songs felt really loud when the band was playing them,” he added.

The “Let’s fall in love for the night” singer is now working on his first full-length album.

“I was actually going through every song that I’ve started and figuring where I am with all that. I’m feeling pretty good about it! I’m definitely a long way from finished, but I’m also a long way from the start. I’m right in the middle, I think, and that makes me feel really happy,” he shared.

“Some of the songs I wrote before quarantine, and a lot of them I’ve actually written in quarantine. I don’t have any idea when it’ll be ready to come out, but I’ve really enjoyed working on it, so I’m excited to just keep making it. There’s a famous quote that goes, ‘You don’t finish albums; you give up on them’. And I think that’s very true. I think you go, ‘Well, I have nothing left, so it must be done’,” he said.

Once artistes are done making music, they hit the road and perform in multiple cities and countries. With the coronavirus scare, touring doesn’t seem to be best idea.

Asked how musicians can reinvent post-pandemic music concerts, FINNEAS said: “I think that’s a really good question, and I don’t feel like I know the answer. If you’d asked me to predict where we’d be now, a year ago, I would’ve obviously given you the wrong answer, because I would’ve had no idea. But — and I don’t say this because I feel this way — I think a lot of people are still going to feel really comfortable going to venues. I think as soon as they feel that it’s safe, people will go to venues. We won’t play shows until we really think it’s safe for all the people going to the shows, but my impression when I see a crowded beach or a crowded park, is that people want to get back to the things they really miss.”

He feels that whenever cases start to go down, whenever a vaccine becomes available to people, concerts will be basically the same as they were pre-pandemic.

“I just don’t know when that will be. And until then, maybe people will do concerts where fewer people are allowed into the venues so they can stay far apart, or maybe they’ll do drive-in concerts… I really don’t know. I’m curious to see what people really enjoy. A friend of mine is going to a drive-in concert; it sounds like a lot of fun! I feel like I would love to go. Whatever keeps everybody the safest is the thing that I’ll be in favour of,” he signed off.