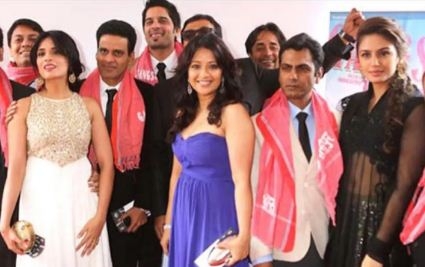 Mumbai, May 23  Bollywood actress Huma Qureshi recently reminisced about being a part of the Cannes Film Festival back in 2012 when her two-part

revenge drama ‘Gangs of Wasseypur’, directed by Anurag Kashyap, was shortlisted to be screened at the Directors’ Fortnight section, a non-competitive section at the Festival de Cannes where 20 films from all over the world were featured.

The actress, who made her film debut with the revenge drama and is gearing up for her biopic on Tarla Dalal, took to her Instagram and shared a string of throwback pictures where one can see the cast and crew of the Anurag Kashyap directorial.

She wrote in the caption, “10 years to the EXACT day when Gangs of Wasseypur had its world premiere at the Cannes Film Festival. My first film, the first time I saw myself on the big screen and my first time at Cannes. It was a crazy special day indeed thank u @vidushak for some of these images Made me really emotional.”

“Thank u @anuragkashyap10 for giving me this film AND a film career and believing in me when no one did. Today so many people who have been part of that film are doing so well … can’t believe how we made this film and had so much fun doing it #gratitude #blessed”, she wrote in her note.

Kashyap’s film was based on the coal mafia in Dhanbad and saw Huma playing the character of Faizal Khan’s (Nawazuddin Siddiqui) wife, Mohsina. The film tells the story of generational revenge and the destruction that it leads to.

On the work front, Huma’s upcoming films apart from ‘Tarla’ include, ‘Monica, O My Darling’ and ‘Double XL’.