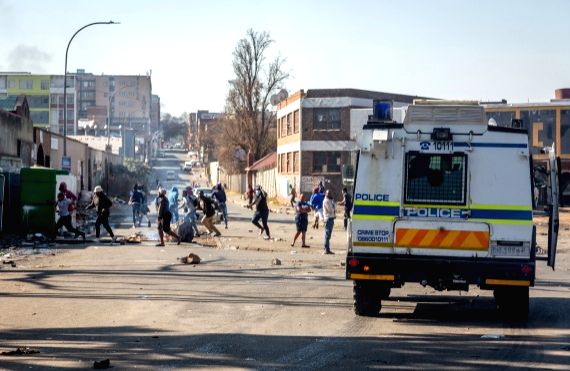 Indian-origin residents in S.Africa arm to defend themselves
Diaspora
·July 16, 2021

Indian-origin residents in S.Africa arm to defend themselves

Durban, July 16 : Indian-origin residents in South Africa have organised armed groups to defend their families and businesses following the ongoing mob violence in the country since July 7.

“We are forced to buy weapons and organise defence groups to protect our neighbourhoods. We are successful in business and professions and many locals are jealous of us. They just wanted an opportunity to loot us,” said doctor Pritam Naidu (name changed for security reasons) from Durban, a city that is home to one million Indian-origin residents.

Naidu said the local police has just been spectators and in some cases even joined the “loot-all, burn-all” mobs, who asked the Indians to leave.

“We are here for several generations. Now some Zulu vigilantes are asking us to leave saying this is not your country,” said Rajesh Patel, who runs a chain of grocery stores in Gauteng, one of the two worst affected provinces along with KwaZulu Natal (KZN).

In Durban alone, 50,000 businesses, mostly owned by Indian-origin people, have been destroyed.

Losses are estimated to be around 16 billion Rands, said Zanele Khomo of the Durban Chamber of Commerce.

The South African government said Thursday night the army has been deployed in the violence-hit areas and reservists have been called up.

It admitted that 117 persons, mostly Indian-origin people, have died in the violence.

It claimed normalcy is returning to Johannesburg, but the situation was still tense in Durban.

“We will shoot to kill if the mobs come again,” said trader Joseph Kamath (name changed).

“They pillaged our localities, our shops and malls were destroyed, but if they come for our houses now, we will fight and die to preserve family honour,” he told IANS over messaging apps.

South Africa is in a state of chaos and unrest ever since the arrest of former President Jacob Zuma on July 7.

Zuma, once known for his fight against apartheid, was imprisoned in the Estcourt Correctional Centre for 15 months for disobeying court orders.

He did not testify before the judicial commission that was investigating accusations of corruption against him between 2009-2018.

Several South Africans hit the streets to protest against the incarceration of Zuma and soon, those demonstrations turned violent against Indian-origin people.

Images and videos of rampant arson, shooting and loot emerged as the violence engulfed the streets of Gauteng and KZN provinces.

Interestingly, two-thirds of the 1.4 million strong Indian-origin population of South Africa lives and works in KZN, mostly in Durban.

Some images also show how Indians had armed themselves to defend themselves and their property.

They are organising neighbourhood watches and night patrols, fully armed and equipped with walkie-talkies.

As the violence continued unabated, South Africans took to Twitter to attack the Indian community, specially the Gupta Brothers, long blamed for corruption with Zuma’s backing.

A South African man was found inciting violence through a tweet, asking his brothers to remember how “Jacob Zuma sold the country to Indian Monopoly Capital”.

The picture that accompanied this tweet was of the Gupta Brothers.

The Gupta brothers, Ajay, Atul, and Rajesh, as well as Atul’s nephews Varun and US-based Ashish and Amol, are a family that hails from Uttar Pradesh, Saharanpur.

They migrated to South Africa only in 1993.

Atul founded Sahara Computers, the family’s first business in South Africa. Now, with a net worth of over $10 billion, the Gupta brothers own coal mines, computers, newspapers, and other media outlets.

“They have siphoned billions out of the country and caused huge losses to government treausury by striking under-hand deals with Zuma and other politicians. Now the entire community is being targeted, equated with the corrupt Guptas,” said an Indian-origin journalist on the condition of anonymity.

Indians have often been targeted in African countries and reasons have been concocted out of thin air to justify the violence.

Dictator Idi Amin had expelled thousands of Indians from Uganda in August 1972.

Amin said he wanted to extract a pound of flesh from the British for not giving him arms to invade Tanzania.

But the racist Amin perhaps wanted a convenient scapegoat to distract people from his own misdeeds.

Indian settlers have faced similar violence in the Pacific island nation of Fiji.