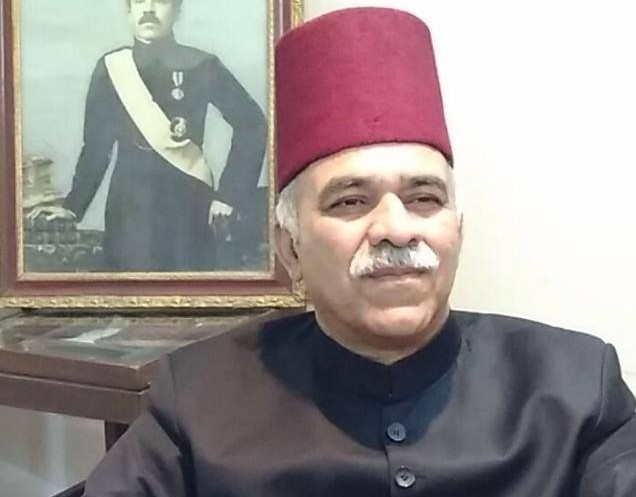 ‘Nizam never discriminated against people on basis of religion’

Hyderabad, Nov 20 Seventh Nizam Mir Osman Ali Khan, the last ruler of erstwhile Hyderabad State and the architect of modern city of Hyderabad, was a visionary who never discriminated against people on the basis of religion, says his grandson Nawab Mir Najaf Ali Khan.

He rues that immense contributions of his grandfather were forgotten while some elements are even attempting to tarnish his secular image.

“My grandfather was someone who never discriminated between people of any religion, caste or financial status. He was an excellent and just person who kept all the people under his reign at the same mounting,” Najaf Ali Khan told IANS.

He believes that present divisive political atmosphere in the country has given rise to things like ‘Hindu India’. “If such a thing exists it is solely due to the divisive political atmosphere of our country right now. As children and young adults we never knew what the difference between being a Muslim or a Hindu was. We never discriminated between people of any religion,” he said.

“I am as much an Indian as any other person of his country whose family has been here for more than 10 generations,” he added.

He is of the view that Muslims need to come together and align their goals for the betterment of the community.

Prince Hasham Jah Bahadur was one of the 16 sons of Mir Osman Ali Khan. The Nizam also had 18 daughters.

“An anecdote about my father is that an extraordinary gazette was issued on his birth in 1912 and holiday was announced state wide to commemorate his birthday,” said Najaf Ali Khan.

Ten of Nizam’s sons and daughters were issueless. He had 104 grandchildren, some of whom have passed away.

About 400 family members of the Nizam clan, mostly 5th and 6th generation, are settled in Hyderabad, other parts of India and abroad.

Mir Osman Ali Khan, who ruled Hyderabad State from 1911 to 1948, was considered the richest man in the world with a fortune of $2 billion.

“As the Nizam had 16 sons and 18 daughters our family is quite large. All are well educated and the young generation is paving the way in terms of new opportunities,” said Najaf Ali Khan, one of over 100 legal heirs to Nizam VII.

According to him, the late Nizam did outstanding philanthropic work for all religions and one of the very few rulers who lived solely for the welfare of his subjects. “This was evident from the fact that his funeral was the largest. A sea of over one million people attended his funeral irrespective of caste and religion and the Government issued an extraordinary gazette and declared it a State holiday,” he said.

After Hyderabad State acceded to India, Mir Osman Ali Khan was appointed Rajpramukh and he held the administrative post till 1956 when the title was abolished.

“One of the late Nizam’s countless contributions is the donation of 5000 kgs of gold for National Defense Fund in 1965 which he donated without any reservations for the welfare of the country and advancement of its defense. This donation is unmatched in the history of India,” said 56-year-old Najaf Ali Khan.

Seventh Nizam also built the Nizam Orthopedic Hospital for the poor people who didn’t have the means to travel for their treatment. He also founded the Nizam Charitable Trust for the poor irrespective of any religion. “He led a Spartan life with very few comforts and luxuries and felt that he had a fiduciary duty towards the people.”

The historic city is dotted with several landmarks built by Nizam. Osmania University, Osmania Hospital, Nizam’s Institute of Medical Sciences (NIMS). In recent years there have been demands by some parties to change these names.

“It can be only viewed as an attempt to erase his heritage and take erroneous credit for the enormous philanthropic work that he did. It is nothing but trying to erode history as we know it.”

He pointed out that successive governments ignored their requests to include a lesson on Nizam in history textbooks or to organize the birth anniversary of the late Nizam as an official event every year in recognition of his umpteen contributions to transform Hyderabad into a modern city.

According to Najaf Ali Khan, Mir Osman Ali Khan was a great ruler who made far-reaching contributions to the development of the region, served humanity and loved his subjects that make him stand out.

He recalled that on the last Nizam’s demise, the then Andhra Pradesh government remembered him by issuing an extraordinary gazette.

The government declared state mourning on February 25, 1967, the day when he was buried. State government offices remained closed as a mark of respect while the national flag was flown at half-mast on all government buildings throughout the state.

On his death, the gazette described the Nizam as “deeply solicitous of the welfare of the depressed classes and through the unremitting labour of his Government many new schemes for promoting their welfare were enunciated”.

It said that he kept up the tradition “to observe absolute impartiality in matters pertaining to religions of different communities in the Dominions” and was well known for his philanthropic activities. He made “substantial contributions to a variety of institutions belonging to all creeds and communities such as the Banaras Hindu University, Bhandarkar Institute, Santiniketan, Aligarh Muslim University, etc.,” the gazette said.

The gazette also noted that he established the Osmania University in 1918, the first of its kind in India to have an Indian language as the medium of instruction. He took personal interest in the construction of the buildings of the University, which possess elements of Hindu and Muslim architecture blended with beauty, and Buddhist, Jain, Chalukyan, Bahamani and Qutub Shahi styles of architecture harmonised into one.

A business consultant to Indian and foreign companies, Najaf Ali Khan is also working for the welfare of the Nizam family as president of Nizam Family Welfare Association.

He has been in the forefront to fight for the legal rights of the family members and is currently waging a legal battle to get their share in 35 million British Pounds.

The UK High Court had ruled last year that cash pot be divided between Indian government and Nawab Mir Barkat Ali Khan alias Prince Mukarram Jah, the titular Nizam and his brother Prince Muffakham Jah. Najaf Ali Khan, however, approached Hyderabad police seeking action against the princes for using ï¿½invalid’ certificate in the case relating to 70-year-old dispute about the money transferred by Nizam to Pakistan high commissioner in London at the time of Hyderabad State’s accession to India in 1948.

Najaf Ali Khan argues that the certificate of succession issued by the Government of India recognizing Mukarram Jah as sole successor to his grandfather Nizam VII became invalid after the 26th Amendment Act, 1971 in Constitution of India by the insertion of Article 363A.

According to him the Nizam’s descendants have been suffering at the hands of two princes and the trustees of the Nizam’s Trust.