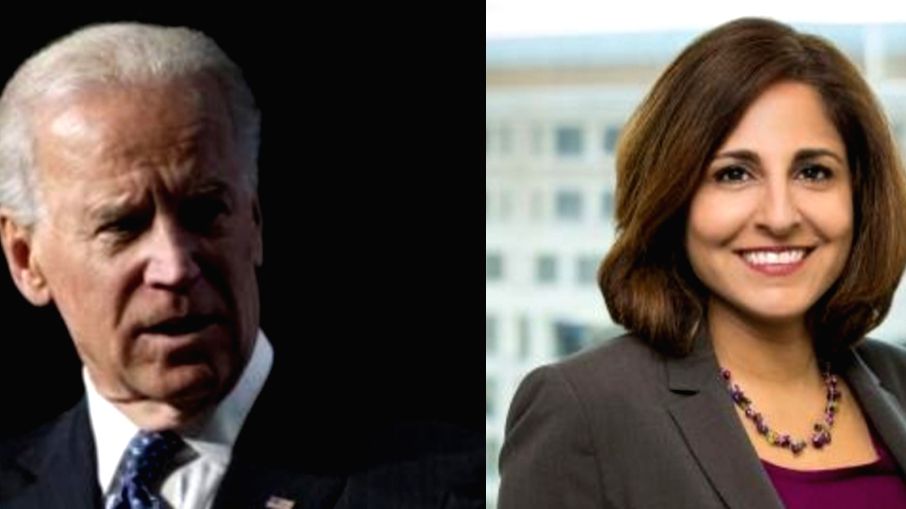 South Asian group mobilises for Tanden as Biden stands by her

NEW YORK Feb 23: While President Joe Biden doubled down on the nomination of Neera Tanden to a top cabinet post as it began unravelling, activists are mobilising for and against her.

South Asians for Biden, a group that campaigned for him, asked members of the community on Monday to contact key senators who could ensure her confirmation by the Senate as the director of the Office of Management and Budget (OMB).

If she were to get confirmed by the Senate, Tanden would be the second Indian American to be in the US cabinet, the first to make the breakthrough being Nikki Haley, who had the cabinet rank when former President Donald Trump appointed her the US permanent representative to the United Nations.

Director of the OMB arguably holds the most powerful cabinet post as the official framing of the $5 trillion US budget that determines the allocations for the various departments and vetting policy and appointments.

Her confirmation became uncertain when Democrat Senator Joe Manchin said that he would not vote for Tanden, who had alienated politicians in her party and the Republican party through her intemperate tweets.

Though a Democrat, Manchin was elected by West Virginia, an overwhelmingly Republican state, and he clashed with Vice President Kamala Harris over an interview she gave a TV station in his state.

The Senate is split 50-50, with Harris having a casting vote, and the Democrats cannot afford to lose even one vote from their ranks.

The Democratic leadership was hoping to counter that with votes from the seven Republican dissidents who had voted to convict former President Trump in the impeachment trial. Four of them considered most likely to vote with Democrats, Rob Portman, John Cornyn, Susan Collins and Mitt Romney, indicated on Monday that they would not vote to confirm Tanden.

South Asians for Biden appealed to the members of the community living in the states of Manchin and the seven Republicans to urge them to vote for Tanden.

Biden’s Spokesperson Jen Psaki said on Monday that they still saw a way to get 50 or more votes for Tanden.

“We’ll continue to work in supporting her nomination,” she said, adding, “President nominated her because he believes she’d be a stellar OMB Director.”

A “Twitter storm” organised by Roots Action brought forth hundreds of tweets savaging her, including many by those she had attacked like the actress Susan Sarandon.

As Clinton’s campaign adviser, Tanden made a personal attack on Senator Bernie Sanders, the candidate on the Left to challenge her for the party nomination in 2016.

Sanders, who now heads the Senate Budget Committee which must give a preliminary approval for her confirmation, said at a panel hearing last week, “There were vicious attacks made against progressives, people who I have worked with, me personally.”

She had claimed that Russia was trying to help him. Sanders also said he was concerned about the funding her think tank, Centre for American Progress, received from big businesses. Her torrent of vicious tweets mirroring Trumps from the opposite side has come to haunt her.

“The tone, the content, and the aggressive partisanship of some of Ms Tanden’s public statements will make it more difficult for her to work effectively with both parties,” Portman said.

Romney’s Spokeswoman Arielle Mueller said that he has been critical of “extreme rhetoric” and “believes it’s hard to return to comity and respect with a nominee who has issued a thousand mean tweets.”

Before Biden announced her nomination, Tanden scrubbed about 1,000 tweets by her own admission. Collins said, “Her past actions have demonstrated exactly the kind of animosity that President Biden has pledged to transcend.”

Emboldened by the weakening of support for Tanden, a subtle campaign has also been started in some circles against Vivek Murthy, the nominee for surgeon-general with news stories about him receiving about $2 million as consultancy fees last year mainly from tourism-related businesses, even though there was no conflict of interest or anything unethical as he was not in government.

Dewan asked South Asians to also contact their senators in support of Murthy.

“His impeccable credentials, experience, and ethics are precisely all of the qualities we need in our next Surgeon-General, and merit his swift confirmation,” Dewan said.

“In making their decisions on the nominations of Ms. Tanden and Dr. Murthy, we urge both Republicans and Democrats in the US Senate to not only appreciate their qualifications, but to also acknowledge the significance of their nominations for the broader South Asian community,” she added.