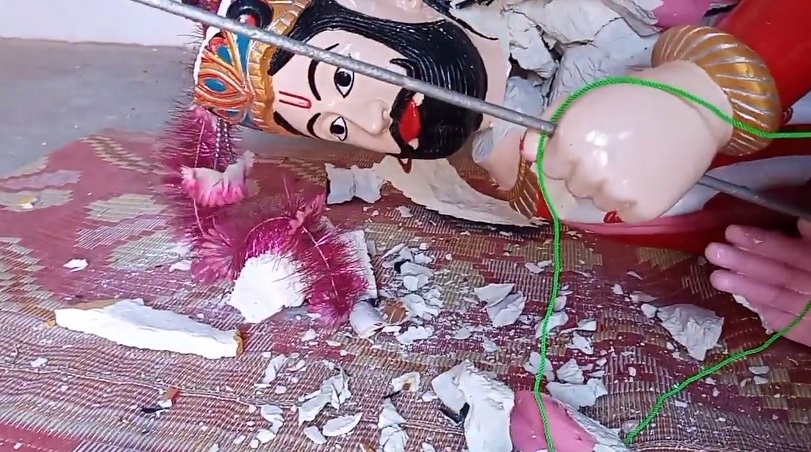 The Ram Peer Mandir at Badin in Sindh, Pakistan was vandalized, last week. Human rights experts believe that out of 428, only 20 temples are left in Sindh now.
International News
·October 13, 2020

New Delhi, Oct 13 In June, a Hindu temple was converted into a mosque in Golarchi, Sindh. Along with it happened the conversion of over a 100 Hindus to Islam. The month before, similar scenes were witnessed at Bahawalpur when an entire colony of minority Hindu community was razed to the ground.

July saw demolition of under-construction Shri Krishna Mandir in Islamabad, just a few days after its ground-breaking ceremony. It was supposed to be the first temple for Hindus in the Pakistani capital.

In August, a pre-partition Hanuman temple in Lyari, Karachi, was turned into rubble by the bigots and so were over two dozen homes of Hindus in the area. Desecration of another Hindu temple in Sindh’s Tando Allahyar and the worshippers mercilessly beaten by fundamentalists happened in September.

And now, the Ram Peer Mandir at Badin in Sindh has been vandalized, last week. There aren’t many Hindu temples left in Pakistan and the lucky few which have managed to survive till date are probably being bulldozed as you read this.

Hindus, Christians, Sikhs, Shias, Ahmadis; mass conversions, rapes, forced marriages, extra-judicial killings — Pakistan, one of the worst violators of human rights, is no longer a safe place for religious minorities to live. It never was. But, the intolerance and ill-treatment has grown at an alarming level over the last few years.

“Out of 428, only 20 mandirs are left in Sindh now,” says Pakistan’s human rights activist Anila Gulzar. After demolition, the Islamists turn ancient temples into mosques, parking lots and anything else you can think of. The authorities fool the locals and activists by arresting the ‘culprits’ before declaring them as ‘mentally sick’ as it has also happened in Badin a few days ago and all the other places before it.

The region which once had a sizable population of Hindus — the 1998 census reported approximately 6.5 per cent of Sindhi population to be Hindu — has also witnessed mass conversions in the last many decades. However, instead of protecting the rights of minorities, the Imran Khan government has intensified its attack on communities already waging a brave struggle for survival.

The Protection of Rights of Minorities Bill, 2020 was rejected by the Standing Committee on Religious Affairs and Interfaith Harmony with Senator Hafiz Abdul Karim dismissing the need for the bill. “Minorities in Pakistan have already been granted several rights. A lot of fuss is made when some Hindu girls convert to Islam and marry Muslim boys. Everybody has the right to freedom of religion,” he said.

Based on the annual report of the United States Commission on International Religious Freedom (USCIRF), which had accused Pakistan of engaging in systematic, ongoing, and egregious violations of religious freedom, as defined by the International Religious Freedom Act, the US government had redesignated Pakistan as a “country of particular concern,” or CPC.

“Religious freedom conditions across Pakistan continue to trend negatively. The systematic enforcement of blasphemy and anti-Ahmadiyya laws, and authorities’ failure to address forced conversions of religious minorities, including Hindus, Christians, and Sikhs to Islam, severely restricted freedom of religion or belief. While there were high-profile acquittals, the blasphemy law remained in effect. USCIRF is aware of nearly 80 individuals who remained imprisoned for blasphemy, with at least half facing a life sentence or death,” mentioned the USCIRF’s 2019 report on Pakistan.

But, has it really made any difference? Not really. The Pakistani government has now got used to of seeing the country’s image take a global beating. It is a recipe for a disaster, not just for the minorities but the entire population.

“The father of this nation said that religion is not the business of the state, but throughout Pakistan’s history, the state has made religion its business at every turn. Unfortunately, to distract from their failings and weaknesses, or to fulfil their own strategic and worldly ambitions, the powerful make opportunistic choices, while the ‘silent majority’ unthinkingly become accomplices to oppression. If nobody stands up for what is right, or wants for others the same freedom and security they seek for themselves, we will keep spiralling down a very dangerous path,” said an editorial in Pakistan’s leading daily, Dawn, a few months ago.

(This content is being carried under an arrangement with indianarrative.com)