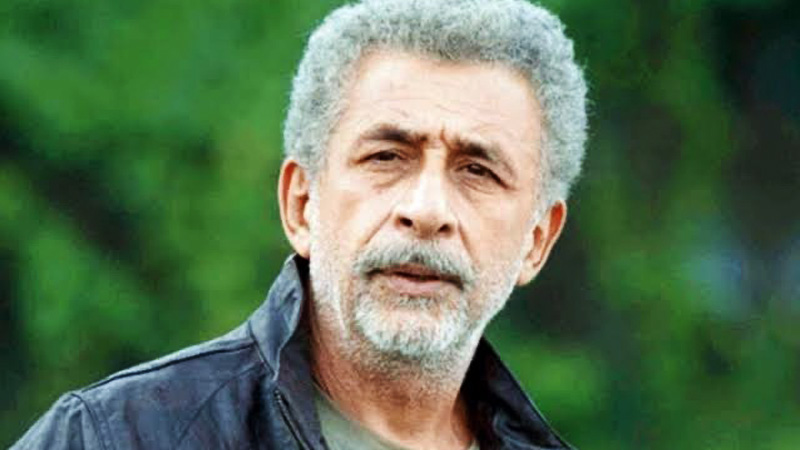 NEVER ANOTHER LIKE NASEER SIR
I have had many encounters with this unusual man with the most unusual talent, and I have tried my best to see if there were any chinks in his armour, to see if all the name and fame had changed him as a man, but if there has been any time I have lost, it is all because of this one man who is not only a one man show but a man who it is an experience and a indescribable pleasure to know…

I have had the great pleasure of knowing him from the time he lived as a paying guest in the New Life Society outside the Sacred Heart’s Church at Santacruz and then moving on to what was once known as the “Queen of the suburbs”, Bandra. He was now a star of his own kind and could afford to buy a two- bed room flat on Cartor Road in a building called Sand Pebbles as a neighbor of the renowned film song writer Anand Bakshi who lived in the next building on Carter Road. He was now living with his two sons Imaad and Vivaan who was then joined by Hiba. Naseer’s daughter from his first wife who was also a very good theatre actress and life was as simple as it could be with no trappings of anything like stardom, except for having a manager like Jairaj who has been working with him ever since he had work enough to pay Jairaj and his other staff their salaries…

We have never forgotten those days when he was a new actor in Bombay and I was a cub reporter who had the uncanny knack of recognizing talent which my then editor, Mr. S. S Pillai knew and gave me all the opportunities to make huge of this talent and one of my opportunities was this entirely un-actor like actor with an unusual name for an actor like Naseeruddin Shah.
I was among the first who saw him revolt against what was called the parallel cinema or the New Wave film movement when he decided to do Rajiv Rai’s “Mohra” and sang and danced with Sonam, a new actress to the song “Oye Oye” which made his gurus of the parallel cinema turn red in their faces, but it was Naseer who gave them a fitting answer when he said, “how long can I slog for a mere twenty-five thousand rupees for a film?” His revolt led many other actors and actresses to leave all the movements and join mainstream cinema where there was “bread, butter and jam”.

I lost no opportunity to see a film of Naseer however bad because I knew he would be good under all circumstances. I became a theatre addict because of his talent on stage…

There was a gap in our association and I could not meet him for a number of years. I was releasing my new book, “Witnessing Wonders”’. I just took a chance and called him on his cell and told him about my book release. He said he was in Cochin and would return on April 15. I told him my function was on April 16. He said he would be there. And he was there before the seventeen or eighteen other major guests I had invited.

I was associated with a college and invited him to address the students and he said he would like to and he gave the students something they would cherish or their lives. On the way, he said he would like to perform a play for the students of the college. And he kept his word and it was not only him but his wife Ratna Pathak Shah, daughter Heeba and colleague Kenny who performed not one but three little plays for the students without making them even think of small things like money.
Only recently as I keep telling everyone now, I had a ghastly accident. I did not on my own try to let anyone know or ask anyone for help, but it was Shah Rukh Khan who ruled my heart and mind when his Trust on the very second day told the hospital that all the payment during my stay in hospital would be borne by the Trust and what was promised was done.
There were many others who came up with help, but what Naseer did is something I have still not been able to comprehend. I had preserved his cheque till two hours ago, but it was some bank regulations that made me reluctantly deposit the cheque.
But what made me cry with joy was what Naseer did at the function hosted by the Heritage Foundation Trust to release the book by the renowned Archivist, Mr. P.K Nair. Naseer was to read excerpts from the book which he did in his own way. The function was almost over when he noticed me sitting with my walking stick. I could not believe what I was seeing and nor did many others who were seeing him. He literally jumped six rows of chairs and reached where I was and asked me everything about my foot and other associated things and asked me if I needed any help. What more could I ask from Naseer bhai who was a bhai in the true sense of the word.

For the rest of the evening my thoughts were all with Naseer and when I couldn’t believe or control my feelings for what he had done, I sent him a message saying, ‘you made me cry in joy, Naseer’ and he wrote back saying, ‘you are a good man, Charlie Brown’. I consider that one line to be more than the Nobel Prize. What more can I ask from this selfish world where people who I believed were my friends came to the hospital and kept saying “so sad, so sad’” and went off to sleep near my bed and other friends who promised to come and see me sometime whose sometime has still to come because they have to use their time and their money for fulfilling their lofty ambitions and foolish dreams, both of which are going to take them nowhere.

God is sometimes a very funny. Why does he create one Naseer and a thousand black sheep who are not fit to be called human beings?